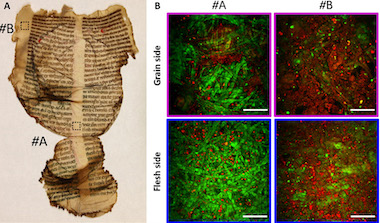 A non-invasive optical technique designed to assess the degradation state of parchments could assist archival study of fragile historical items, avoiding the risk of damage posed by some traditional analysis methods.

A group including Université Paris-Saclay, CNRS and the Laboratory for Optics & Biosciences at École Polytechnique believes that the technique creates new possibilities for the analysis of collagen-based cultural heritage artefacts, such as parchments, leather, or natural history specimens.

As published in Science Advances, the new method uses nonlinear optical (NLO) microscopy to provide quantitative in situ mapping of parchment degradation at the micron-scale.

Parchment is originally manufactured from animal skin, with collagen the main remaining constituent in historical samples. OCT has previously been used to study the influence of inks and pigments on the conservation state of such parchments, but it is not well suited to characterizing the organization of the collagen fibers.

According to the project, the dense arrangement of the fibers after the manufacturing process homogenizes their optical properties and strongly reduces the contrast of OCT images. A method based on NLO should enable more effective assessment of the parchment properties.

"We introduce two parameters that are sensitive to different degradation stages," noted the team in its published paper. "The ratio of two-photon excited fluorescence (2PEF) to second harmonic generation (SHG) signals probes severe degradation, while the anisotropy parameter extracted from polarization-resolved SHG measurements is sensitive to early degradation."

A key advantage of this technique is this multimodal capability, based on different modes of contrast that are directly linked to the structural or chemical nature of the materials.

The 2PEF signals are emitted by a wide range of fluorophores in historical artifacts with specific absorption and emission fluorescence spectra, while SHG signals are specific for dense and well-aligned structures such as fibrillar collagen, according to the team.

Combining SHG signals with an analysis of the light's polarization then allows the degree of alignment in the fibrillar collagen to be measured, which is closely related to the extent to which degradation has progressed.

After trialing the technique on contemporary parchments artificially altered by heat exposure, the project applied its NLO microscopy to 13th century parchment manuscripts damaged to varying degrees in 1944 during the liberation of France.

NLO was able to map the conservation state of several of the parchment manuscripts, and confirm the absence of impact from the restoration process.