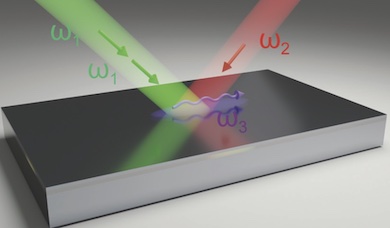 Near and far: enhanced super-resolution

The principles behind super-resolution imaging and its ability to visualize objects smaller than those theoretically indicated by the Abbe diffraction limit continue to be developed further by ingenious researchers.

A project at Shanghai Jiao Tong University has now demonstrated how the Abbe limit can be broken in a nonlinear optics regime, potentially a route to label-free far-field super-resolution imaging.

Published in SPIE Advanced Photonics, the method could pave the way for applications in biomedical imaging, semiconductor metrology and photolithography, according to the team.

The significance of super-resolution methods was recognized when three of the field's pioneers shared the 2014 Nobel prize for chemistry, for work on super-resolved fluorescence microscopy techniques such as stimulated emission depletion microscopy (STED).

Modifications to STED and the optics involved have produced continual improvements to the technique and indicated its potential in biomedical imaging, but the far-field nature of STED and other techniques has determined the avenues available to follow.

Nonlinear optics could offer an alternative way to beat the Abbe limit, according to the Shanghai group. Harnessing the evanescent fields usually associated with near-field nonlinear behavior allows the performance of a super-resolution technique to be enhanced, by retrieving those previously undetected waves from the far-field data.

Coupling these evanescent waves with the conventional far-field signal "may enable a fluorophore-label-free imaging method, in contrast to STED and other existing techniques, which is highly desirable not only in biomedical imaging but also in other areas such as semiconductor metrology processes," commented the Shanghai team in its published paper.

"How to retrieve these near-field evanescent waves in the far field is the key to beating the Abbe diffraction limit."

Improvements much in demand

To do so, the team designed an architecture exploiting four-wave mixing (FWM), the non-linear effect whereby interactions between three electromagnetic fields can produce a fourth field.

In proof-of-concept trials imaging a nano-slit array, the project's platform achieved a resolution of around 140 nanometers, equivalent to a value of λ/5.6 using the experiment's laser wavelength and comfortably beating the Abbe limit.

Further work could involve combining the new approach with coherent anti-Stokes Raman scattering, potentially making the new technique chemical-specific too. It might also be possible to reverse the process, using the nonlinear evanescent waves to focus light into spots sized below the diffraction limit through constructive interference, according to the team's paper.

Bioimaging techniques could readily benefit from the new approach, and the potential advantage of delivering super-resolution performance without the need for fluorescent labels or risking laser toxicity from higher light intensities.

"Our technique offers a label-free, scan-free, and far-field super-resolution capability, which is much demanded in biomedical imaging applications," commented the project.