New technique could assist in diagnosis of cancer and other diseases. 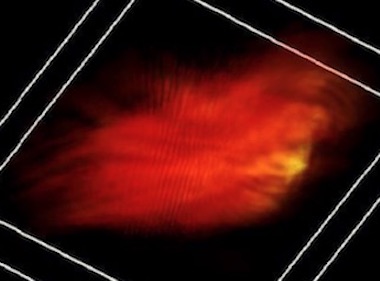 A microscopy platform developed by Colorado State University and University of Illinois at Urbana-Champaign offers a new approach to 3D imaging of tissues and biological specimens, to help with diagnosis of diseases including cancer.

Christened harmonic optical tomography (HOT), the technique builds on the established use of second-harmonic generation (SHG) as a means to create contrast in images of cells and tissue structures. The findings were published in Nature Photonics.

"Our lab specializes in using holographic data to investigate live cells and tissues," said Gabriel Popescu of the University of Illinois's Beckman Institute. "We wanted to extend this technique to nonlinear samples by combining the holographic data and new physics models."

Second-harmonic microscopy relies on the nonlinear optical process that occurs when two excitation photons interact with a target. In practice this requires the use of a tightly focused laser pulse to restrict the SHG scattering to a small region at the focal point of the incident light, and a 3D volumetric signal is then obtained by scanning the focal position within a target.

Holographic SHG microscopy offers one route to recording the full field of second-harmonic scattering at high speed; but to date the inverse procedure - measuring the complex harmonic field and then reconstructing the distribution of the biological items causing the scattering - has been challenging.

The project's solution involved illuminating the sample with out-of-focus laser light, interferometrically measuring the complex harmonic field that is generated, and using a scattering inverse model to reconstruct the three-dimensional distribution of harmonophores. This HOT principle represents an entirely new form of optical tomography, according to the team.

"A key to the experimental demonstration of this new nonlinear tomographic imaging was a custom, high-power laser," commented Randy Bartels of CSU. "This source was integrated into a custom off-axis holographic microscope that used a high numerical aperture condenser lens defocused for wide-field illumination. It is this special illumination condition that allows the nonlinear optics to create the second-harmonic generation signal, and obtain information to form a 3D image."

The HOT technique should be able to acquire 3D data considerably faster than a conventional laser-scanning microscopy operation, since it effectively collects 2D images from different depths in a sample but without the relatively slow process of pixel-by-pixel scanning. A faster operation should be less vulnerable to vibrations and unwanted microscope drift, and produce sharper images.

In addition, most tomographic techniques require either the sample or the illumination to be rotated, which can be a source of practical difficulties for larger objects such as human patients. HOT only requires the sample to be translated in one direction, simplifying the geometry and minimizing misalignment.

Trials on organic samples, including pumpkin stems and samples of rodent muscle, confirmed that HOT was able to generate 3D views from reconstructions of SHG intensity measurements, and could now open a new avenue to study nonlinear optical measurements in biomedical and diagnostic applications.

One example could be the imaging of collagen, known to be a bright generator of second-harmonic signals and also the most abundant protein in the human body. Assessing the structures of collagen fibers in 3D rather than 2D could be valuable in cancer diagnosis, since collagen fiber orientation has been shown to be prognostic for a number of types of cancer, and relate to how aggressive a particular cancer is.

"This work is an exciting example of how close dialogue enables refinement of both theory and experimental design to produce innovative new concepts," commented Bartels.