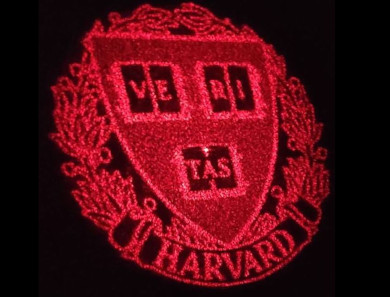 Metasurfaces and their novel or counterintuitive optical properties can achieve a variety of functions that conventional bulk optics components cannot.

As published in Nature Communications, the new breakthrough could lead to optical architectures able to control parameters such as wavelength and power without separate moving components, leading to less bulky and more efficient platforms.

"Our approach paves the way to new methods to engineer the emission of optical sources and control multiple functions, such as focusing, holograms, polarization, and beam shaping, in parallel in a single metasurface," said Federico Capasso.

Metasurfaces employ arrays of subwavelength-spaced nanostructures on a substrate, which modify the amplitude, phase and polarization of incident light. The creation of multifunctional metasurfaces, however, has remained challenging.

In its published paper, Harvard SEAS notes that there is currently no optical component which has the flexibility of metasurfaces in beam shaping while also implementing different functions with large differences in deflection angle, ie. one that might perform different functions in different directions simultaneously.

The project's solution utilizes supercell metasurfaces (SCMS) - groups of nanostructure pillars which work together as the building blocks of a "library" of active optical control units, to influence different aspects of incident light. Each supercell in the library is optimized to achieve specific transmission phase and amplitude, according to the project's published paper.

"This allows us to demonstrate independent functions at different and large angles, such as the splitting of one incident beam into a Gaussian, a Bessel, and a focused helical beam," said the project.

Capabilities that cannot be realized by existing metamaterials

To prove the principle, the project built a tunable laser consisting of a laser diode and a reflective supercell metasurface - christened a metasurface external cavity laser (MECL).

"When light hits the metasurface, different colors are deflected in different directions," said Christina Spägele of Harvard SEAS. "We managed to harness this effect and design it so that only the wavelength that we selected has the correct direction to enter back in the diode, enabling the laser to operate only at that specific wavelength."

Changing the wavelength in this architecture then involves simply moving the metasurface with respect to the laser diode. Since it does not involve any rotating component, this design is more compact and simpler than existing wavelength-tunable lasers, noted the project.

The group used its tunable laser to create a hologram of the Harvard University seal. In this case the light output from the supercell metasurface generated the hologram, without having any effect on the other light focused back to the laser facet by the metamaterial.

This serves as a demonstration of the independent phase control on each diffraction order which is possible with supercell metasurfaces, noted the project in its paper.

According to Federico Capasso, the arbitrary beam control capabilities of the new external cavity laser concept cannot be realized by existing metasurface and metagrating implementations, and it potentially outperforms standard ECL platforms, paving the way to new active optoelectronic devices.

"In addition to controlling any type of laser, this ability to generate multiple beams in parallel and directed at arbitrary angles, each implementing a different function, will enable many applications from scientific instrumentation to augmented or virtual reality and holography," said Capasso.