Flat lens from Harvard physicists turns 'normal' optics on its head with the help of metasurfaces. 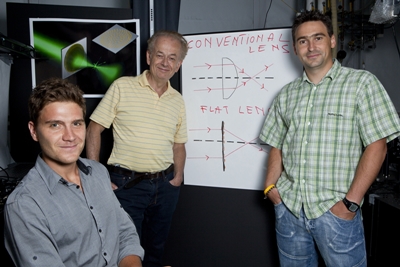 A whole new world of optical components based on flat, rather than curved, surfaces could be on the way after a team from Harvard University devised a way to create planar yet achromatic optics.

The innovation, just published in the journal Science by the highly regarded research group led by Federico Capasso, is said to represent a dramatic improvement on the original flat lens - the first of its kind - demonstrated by the same group back in 2012.

That metallic prototype corrected some of the aberrations of conventional lenses but still suffered from some major limitations: it could only focus light of a single wavelength, and had a low focusing efficiency.

The new model is based on a dielectric material rather than a metal. This is said to greatly improve the focusing efficiency while enabling operation over a broader range of wavelengths.

Most significantly, says the Harvard team, the new design enables the creation of two different types of flat optical device. The first is able to deflect three different wavelengths of light by exactly the same angle. In the second, the three wavelengths can all be focused to the same point.

Capasso is quoted as saying: “This is a major step forward in establishing a planar optical technology with a small footprint which overcomes the limitations of standard flat optics.

“It also opens the door to new functionalities because of the enormous design space made possible by metasurfaces.” 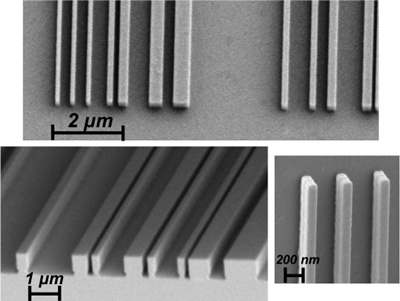 Flat photonics: under the electron microscope

Rather than gradually bending while it passes through the components, as is normal, incident light is instead bent instantaneously.

This means that the optical effects can be designed in advance and fine-tuned to fit almost any purpose, perhaps creating a perfectly focused image, or a twisting vortex beam of light.

“What this now means is that complicated effects like color correction, which in a conventional optical system would require light to pass through several thick lenses in sequence, can be achieved in one extremely thin, miniaturized device,” added Capasso, who also led the Bell Laboratories team that made the first quantum cascade laser (QCL) back in 1994.

Bernard Kress, principal optical architect within the Google [X] project, was among those to hail the latest work as a major advance. In Harvard’s release on the research, Kress said:

“Google [X], and especially the Google Glass group, is relying heavily on state-of-the-art optical technologies to develop products that have higher functionalities, are easier to mass produce, have a smaller footprint, and are lighter, without compromising efficiency.

“Last year, we challenged Professor Capasso’s group to work towards a goal which was until now unreachable by flat optics. While there are many ways to design achromatic optics, there was until now no solution to implement a dispersionless flat optical element which at the same time had uniform efficiency and the same diffraction angle for three separate wavelengths.

“We are very happy that Professor Capasso did accept the challenge, and also were very surprised to learn that his group actually solved that challenge within one year.”

Commercial potential
If they can be produced in large quantities and at reasonable cost, the flat optical designs could come to rival the much bulkier components currently used in photography, astronomy, and microscopy. The Harvard team says that it could also create miniature devices useful for optical communications and imaging applications.

With a provisional patent filed on the new technology, the university says that commercial opportunities are now being actively pursued. Aside from Google, a research group at Hewlett Packard – where the paper’s lead author Francesco Aieta now works – has also worked on flat optics based on dielectric materials.

Capasso has discussed the theory and practical potential of flat optics based on metasurfaces at numerous conferences in recent years, including at SPIE’S Optics + Photonics event in 2013 (see embedded video below).

In that San Diego presentation he said that the original metallic flat lens showed a large numerical aperture and no spherical aberrations, but also that it suffered from a low focusing efficiency.

And while Capasso added in the same talk that he was not anticipating any overnight revolution with flat optical components, he did see a broad opportunity emerging over the coming 5-10 years. One example could be in smart phones, where wafer-thin lenses could enable designs no thicker than a credit card, while uses also beckon in the biomedical world and for applications involving the "chemical fingerprint" mid-infrared spectrum.

"The ultimate thing is to [design] a high-speed, tunable phased array for real-time wavefront control at any wavelength, down to the visible," he said. "That's really the holy grail."

Aieta said of the latest work: “By demonstrating achromatic lenses we have now made a major step forward towards widespread future application of flat optics that will certainly attract the interest of the industry.”