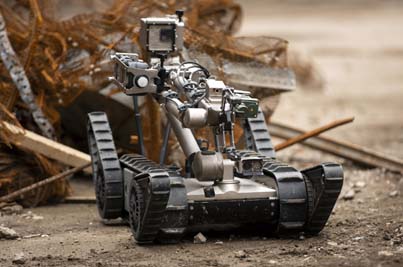 Thermal imaging robots are helping with the search.

A number of small thermal imaging robots are helping with the search for survivors of the Florida condo building collapse. The thermal imagers were rushed to the site by the digital imaging giant Teledyne FLIR.

At the time of writing, at least 11 victims had been found in the rubble since the 13-story condo building in Surfside, Florida, collapsed early on Thursday June 24th. A fire official said some 1400 tonnes of concrete have been carted away. Almost 150 people are still listed as missing. Some 35 people were rescued from the building, said the Miami-Dade Fire Rescue department.

The imagers working on site include the FirstLook and the PackBot 510.

A spokesman for the Defense Technologies branch of Teledyne FLIR, Joe Ailinger Jr., said he could not provide details on how the company’s imagers were being used on site. “I can only confirm we have delivered two of our unmanned ground vehicles (Teledyne FLIR FirstLook and PackBot UGVs), and one of our trained robot operators is on-site assisting Miami Fire and other agencies as needed.”

The light-weight “throwable” FirstLook robot seems suited to the Florida challenge. It is less than 300mm (12in) long, weighs only 3kg (6.6lb) and can “survive a 5m (16ft) drop onto concrete, FLIR said. With its caterpillar tracks, it can climb over 200mm (7in)-high obstacles including curbs, and can be thrown to a new location without damage. If it lands upside down, it has a self-righting arm that sets it in place. It has a multirobot controller, and offers four built-in color cameras.

The PackBot is just over 600mm (2ft) long, fits into an auto’s trunk and can be deployed by one person. It is useful, FLIR says, for functions like bomb disposal and surveillance, and supports a camera with thermal capability.

It can easily climb stairs, roll over rubble, and navigate narrow passages, relaying real-time video, audio and sensor data to the operator, FLIR said. It can lift up to 20kg (44lb). PackBot’s secure MPU5 smart radio system has a MANET (for a mobile ad hoc network); a wireless ad hoc system that does not require routers.

Such robots with thermal imaging have been useful in many similar situations. After the nuclear plant disaster in 2011 at Fukushima Daiichi Nuclear Power Plant in Japan, robots could enter the buildings and take readings and return safely with their data.

In 2013, thermal imaging -- which records heat and not light, and thus works in the dark -- famously revealed the hiding place of a Boston Marathon bombing suspect inside a boat.

“Anytime we have a chance to help when disasters like this strike, we put our equipment forward and offer it to first responders, or the military, or whomever needs it,” said Ailinger of Teledyne FLIR. “We hope it can make a difference.”