'DAVINCI+' mission selected by NASA will investigate composition of Venus' atmosphere and whether the planet ever had an ocean. 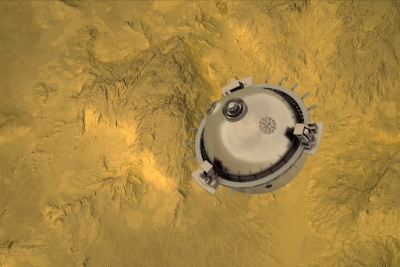 NASA has selected two new missions to Venus, one of which will feature an ultraviolet imaging spectrometer based around freeform optics.

The cutting-edge instrumentation on board the “DAVINCI+” (Deep Atmosphere Venus Investigation of Noble gases, Chemistry, and Imaging) mission is designed to help reveal how the planet became so hot, when in many respects it is similar to Earth.

Planetary scientists believe that Venus may even have been the first habitable world in our solar system, possibly with continents, an ocean, and an Earth-like climate.

However, the Venusian atmosphere is now a high-pressure combination of carbon dioxide and opaque sulfuric acid clouds - making optical observations of the planet’s surface impossible.

Optical instrumentation
Costed at around $500 million, DAVINCI+ represents the first US-led mission to the atmosphere of Venus in more than 40 years.

Comprising a spacecraft and a probe, it will feature a “descent sphere” with instrumentation to measure noble gases and other elements, as well as temperature, pressure, and winds. That should help scientists understand why the atmosphere is so hot compared with Earth's.

Those instruments include the Venus Tunable Laser Spectrometer (VTLS) to investigate gas composition, and the Venus Descent Imager (VenDI), which will take hundreds of near-infrared images of the planet’s “Alpha Regio” highlands.

These observations will then be used to determine the nature of the as-yet-unknown ultraviolet absorber in Venus' atmosphere that absorbs up to half the incoming solar energy and makes the planet so hot.

The single instrument on board the spacecraft will feature a suite of four cameras and is called VISOR (Venus Imaging System from Orbit for Reconnaissance).

One camera will be sensitive to ultraviolet light to track cloud motions in the atmosphere. The other three cameras will image near-infrared light to identify surface composition at regional scales when the spacecraft is over the night side of Venus.

Other equipment will return the first high-resolution pictures of geological features on Venus known as "tesserae," which are believed to be comparable to Earth's continents, suggesting that Venus has some form of plate tectonics.

“Venus is a ‘Rosetta stone’ for reading the record books of climate change, the evolution of habitability, and what happens when a planet loses [its] surface oceans.

“But Venus is ‘hard’ since every clue is hidden behind the curtain of a massive opaque atmosphere with inhospitable conditions for surface exploration, so we have to be clever and bring our best ‘tools of science’ to Venus in innovative ways with missions like DAVINCI+.”

The knowledge gained through the mission may also help astronomers better understand Venus-like exoplanets - many of which are expected to be found by the soon-to-launch James Webb Space Telescope and enormous ground telescopes currently under construction.

Major partners involved in DAVINCI+ include Lockheed Martin, which will produce the “fly-by” science platform for the VISOR camera suite, and the carrier/orbital spacecraft.

Selected from an initial four mission concepts originally presented in February 2020 as part of NASA’s Discovery 2019 competition, DAVINCI+ and VERITAS (Venus Emissivity, Radio Science, InSAR, Topography, and Spectroscopy) are slated to launch in the 2028-2030 timeframe. Missions to the moons of Neptune and Jupiter were the two not selected.

The VERITAS instrumentation will include a combination of synthetic aperture radar and infrared equipment to map the surface of Venus. The infrared data should reveal more about the types of rock that are present, and determine whether active volcanoes are releasing water vapor into the atmosphere.