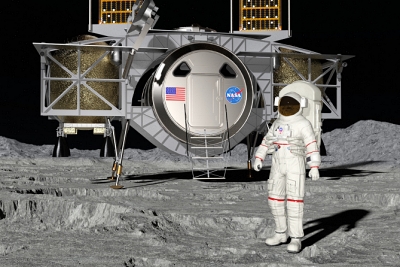 A tunable laser spectrometer system will monitor air breathed by the first astronauts to set foot on the Moon since the Apollo 17 landing in 1972.

Currently scheduled for launch in October 2024, the Artemis III mission is expected to transport two astronauts - a man and a woman - to the lunar surface for the duration of around one week.

Now Dynetics, already selected to deliver the “human landing system” (HLS) that will detach from an Orion spacecraft to enable the landing, says it has won a contract to produce a laser air monitoring system (LAMS) capable of measuring the concentration of oxygen, carbon dioxide, and water vapor.

The company has agreed to produce the Artemis III LAMS unit and a qualification module for $17.8 million - although the contract could end up being worth as much as $90 million if more flight units or components are required.

Nanoplus lasers
While related to a gas monitoring system originally flown on the Mars Curiosity rover, LAMS is described by NASA as a new technology that will measure temperature and pressure as well as gas concentrations.

It will monitor both the cabin atmosphere and the air that is flowed into the astronauts’ spacesuits to support them in the hostile and airless environment on the Moon.

“The system is accurate enough to detect unsafe levels of these elements in cabin air composition, giving crews time to respond,” stated NASA. “LAMS is well-suited to deep space exploration due to its low mass, volume, and power consumption, and ability to operate in space without re-calibration.”

In fact, Dynetics has already delivered the first version of a LAMS unit, for the Artemis II Orion spacecraft - the first Artemis mission that will carry humans, although it will not land on the Moon.

According to a paper co-authored by Dynetics and NASA that was presented at last year’s International Conference on Environmental Systems (ICES), LAMS comprises four individual instruments based around commercial lasers from Germany’s Nanoplus.

“This is the first time a tunable laser spectrometer is being used for atmosphere monitoring and feedback control for ECLSS [Environmental Control and Life Support System] hardware in a manned spaceflight environment,” wrote lead author Jason Pohly from Dynetics’ Technical Solutions division.

One channel uses a 2.68 µm wavelength laser whose beam makes a single pass through an 8 cm-long measurement region, to detect both carbon dioxide and water vapor.

Because the system will be crucial for maintaining the astronauts’ life support, it is being scrutinized under NASA’s highest “Criticality-1R” regime for hardware - the same level for the O-rings of the rocket boosters used to propel the Space Shuttle.

That level of scrutiny extends to the software element of the system. “Every line of code, every single sub-routine, has to be either written and verified from scratch, or evaluated and tested line-by-line,” point out Pohly and co-authors.

Much like some of the technology developed for the Apollo missions, it is expected that the tunable laser sensors will prove useful in myriad applications beyond human spaceflight once they are successfully field-proven.

TLDAS sensors offer multiple advantages in terms of size, weight, and power versus systems currently in use, which typically use mass spectrometry.

Among those are a smaller form factor, relatively low power requirements, more robust hardware, and no need for in-flight calibration.