NIST puts optical aberrations to good use as basis for calibration. 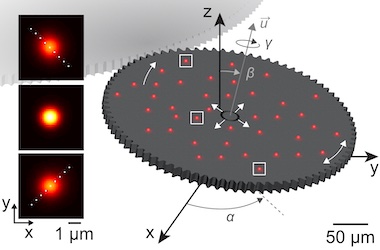 Optical aberrations and the errors they introduce are a standard obstacle in localization microscopy techniques, and hinder the gathering of depth information from a biological sample.

A project at NIST Microsystems and Nanotechnology Division has now developed a means of exploiting those aberrations to improve the overall imaging operation, without customized optics.

As reported in Nature Communications, the method should be particularly valuable in improving the imaging of multiple emitters at relatively large depths below the surface of biological tissues, boosting the 3D capability of localisation microscopy.

"Our approach is counterintuitive," noted the project in its published paper. "The tendency is to consider intrinsic aberrations as defects to reduce through optical engineering, which increases the complexity and cost of optics, or to tolerate by error analysis, which quantifies the degradation of measurement performance."

The alternative approach developed by NIST involved a careful analysis of images of fluorescent particles deposited on flat silicon substrates, studying the exact deformations of light from the localized point-source as they were presented to the imaging system.

In particular the team developed a numerical method in which specific parameters of the deformed image could then be processed to determine a more precise location of the source. The key aberration effects for this purpose included apparent symmetry variation of the point source arising from astigmatism, and intensity variation stemming from defocus.

When fluorescent particles mounted on a silicon gear were imaged, the project monitored the change in aberrations as the microscope was moved vertically in increments. The aberrations could produce large distortions in images even if the microscope moves just a few microns in the lateral plane or a few tens of nanometers in the vertical dimension, according to the team.

Numerical analysis using the aberration effects was then used to model exactly how the lens aberrations altered the appearance and apparent location of the fluorescent particles with changes in the vertical position.

By carefully calibrating the changing appearance and apparent location of a particle to its vertical position, the team succeeded in using the microscope to accurately measure positions in all three dimensions.

"We tested several calibration functions to solve this fundamental problem, finding that Zernike polynomials modelled the variations in astigmatic defocus and apparent position with the best accuracy," stated the project team.

Having demonstrated that this approach could give accurate 3D localization of the fluorescent emitters, the team extended their position measurements to capture the entire range of motion of the silicon gear, including its rotating, wobbling and rocking.

These measurements effectively highlighted the consequences of nanoscale gaps between microsystem parts, imperfections which duly affected the precise aberrations observed. As a result, the aberrations could themselves be used to monitor the performance of microsystems and the component parts.

"Considering the importance of complex mechanical systems in the history of technology, it seems well worth the effort to understand and optimize their motion at small scales," commented the project in its paper.

Lab microscopes could readily implement the new method, according to Samuel Stavis of NIST. All the user needs are a standard sample to measure the effects and a calibration to use the resulting data.

"Counterintuitively, the lens aberrations limit accuracy in two dimensions and enable accuracy in three dimensions," said Stavis. "In this way, our study changes the perspective of the dimensionality of optical microscope images, and reveals the potential of ordinary microscopes to make extraordinary measurements."