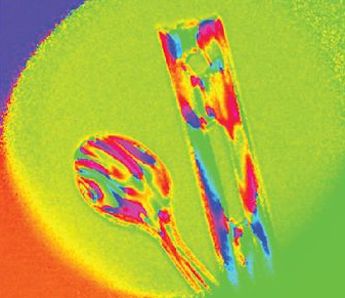 Polarization of light can reveal otherwise invisible information about natural materials and the condition of man-made structures, but the cameras used to detect it are often bulky, expensive, and rely on moving parts.

A project in Federico Capasso's lab at Harvard School of Engineering and Applied Sciences (Harvard SEAS) has developed a device that could make polarization imaging simpler and less expensive, potentially making the technique more readily accessible to applications such as autonomous vehicles or atmosphere science. The results were published in Science.

"This research is game-changing for imaging," said Capasso. "Most cameras can typically only detect the intensity and color of light but can’t see polarization. This camera is a new eye on reality, allowing us to reveal how light is reflected and transmitted by the world around us."

The breakthrough involves the use of metamaterials, which have been a focus of research at Capasso's lab for some time. In this case, they can allow all the optics needed for polarization imaging to be integrated into a single simple device, as an alternative to the more complex devices or non-standard patterned image sensors that have been required until now.

Achieving a complete description of light's polarization involves the values called Stokes parameters, the assessment of which has traditionally required at least four individual measurements to be made. The new platform uses a method based on matrix Fourier optics, described by the project as a "powerful generalization of a large body of past work on optical elements in which polarization may vary spatially." This approach allowed the team to envisage ways of effectively deploying many polarization devices in parallel using just a single optical element.

"We can design diffraction gratings whose orders behave as polarizers for an arbitrarily selected set of polarization states, creating a new class of optical element," noted the team in its Science paper. "The intensity of light on a set of diffraction orders is then dictated by the polarization of the illuminating light, making these gratings immediately applicable to full-Stokes polarization imaging."

Designing these gratings was where the lab's work on matasurfaces came in. Capasso has previously described how metasurfaces may replace complex cascades of polarization optics based on bulk birefringent crystals with a single, flat optical element.

In a 2018 review of the topic for an issue of Nanophotonics honoring his work, Capasso wrote that "Polarization can be used in a unique way to access two different functionalities built into a metasurface. Two completely independent phase profiles can be encoded in a metasurface and subsequently accessed with perpendicular polarizations, to create corresponding unrelated images in the far field."

In the new polarization research, the team designed diffraction gratings with dielectric metasurfaces in which sub-wavelength, anisotropic structures allowed tunable polarization control at visible frequencies. Notably, "an arbitrary set of polarizations may be analyzed by a single unit cell, in contrast to past approaches that relied on interlacing of several individually designed diffraction gratings," commented the project.

A compact camera device was then designed around the new approach, with the key optical element said to be about two centimeters in length and no more complicated than a camera on a smartphone. With an attached lens and protective case, the device is about the size of a small lunch box.

"Polarized light from a photographic scene is incident on the grating inside of a camera," explains Capasso in the project's paper. "The polarization is 'sorted' by the sub-wavelength metasurface grating. When combined with a lens and a conventional CMOS sensor, four copies of the image corresponding to four diffraction orders are formed on the imaging sensor. These copies have each, effectively, passed through a different polarizer whose functions are embedded in the metasurface."

Trials using the device to image at 532 nanometers showed that it could reveal the in-built stresses in a pair of injection molded plastic pieces, when illuminated by a linearly polarized backlight. It was also used to film the polarization effects of car windscreens, and visualize the 3D contours of a human face.