AO can help the technique to operate in 3D mode and see deeper into tissues. 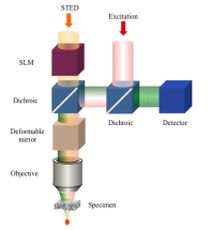 Super-resolution microscopy, the ingenious family of techniques used to persuade imaging systems to see beyond their notional diffraction limits, could soon have its capabilities bolstered even further thanks to adaptive optics (AO).

Already an established fixture in astronomical applications and certain imaging techniques, AO involves monitoring the troublesome aberrations that can arise in an optical wave-front from any of several potential sources, and correcting for them in real-time via a variety of feedback techniques.

Now a team at the University of Oxford has demonstrated how AO can compensate for aberrations caused by the specimen itself in 2D and 3D stimulated emission depletion (STED) microscopes, through an image-based feedback technique. The project, carried out in collaboration with a group at Yale University, has been funded by the UK's Wellcome Trust.

"STED microscopy has clearly been successful already, without AO, and there have been many useful advances made using the method," commented Martin Booth of Oxford University. "However the effects of aberrations may have limited the range of applications in which it has been used. Most of the advances have used STED with 2D resolution enhancement, which has been adequate for many purposes, but which happens to be more stable in the presence of aberrations."

Consequently, one particular goal for the new study was addressing the inherent sensitivity of STED to aberrations when used in its 3D mode, a constraint which has made it more difficult to use the technique on relatively thick specimens.

STED, first developed by Stefan Hell in the mid-1990s and regularly refined since, is a laser-based fluorescence microscopy technique in which the fluorescence from specific regions of the sample is actively depleted by a second laser, while leaving a central focal spot free to emit. Manipulation of the optical parameters allows the axial resolution of this central spot to become smaller than the theoretical diffraction limit of the main excitation laser source, perhaps some tens of nanometers in biological specimens.

But the resolution of the STED microscope depends primarily upon the sharpness of the central area, which is likely to be affected by specimen-induced aberrations in all three of the optical beam paths involved: the excitation path, the depletion path and the emission path.

The new system tackles aberrations in all three paths, by incorporating both a spatial light modulator (SLM) and a deformable mirror (DM), along with an image-based feedback loop. The SLM is used to correct aberrations in the depletion path, an approach already employed in some STED platforms, while the DM is located at a point where it can correct all three paths simultaneously.

"There have been some demonstrations using SLMs for beam shaping and compensation of system aberrations before, but ours is the first demonstration using adaptive optics for correction of specimen-induced aberrations, and the first time that a deformable mirror in conjunction with an SLM has been used for STED microscopy," he noted. "The key here is using image-based feedback to determine the aberrations introduced by the specimen. This is essential, as each specimen introduces different aberrations."

Having tested its capabilities by imaging nanometer-scale beads, the team believes that a number of potential new applications for super-resolution microscopy could be opened up by the system's ability to image thicker tissue specimens, between 10 and 50 microns thick. It may also help to address some of the general complexities inherent in the STED principle.

"Both STED and AO are complex technologies to implement, so the combination posed some challenges," commented Booth. "However, once they were implemented together, we realised that the adaptive element has the potential to considerably simplify the set-up and operation of the STED microscope. For example, by using the SLM to implement the phase plates that shape the depletion focus, we can automate the alignment process and easily switch between different STED imaging modes."

The broader super-resolution microscopy community has been paying attention, recognizing that extending these methods to thicker tissue imaging will inevitably require aberration compensation by one means or another. Implementation of AO in PALM/STORM, an alternative super-resolution technique, might actually prove simpler than in STED from a hardware perspective, again via the use of image-based feedback as the key ingredient.

In the meantime, the enhanced capabilities of STED in its 3D implementation could be a significant step forward. "The 3D mode of STED is especially sensitive to aberrations, so performing 3D STED in thick specimens has always been challenging," said Booth. "I think that AO will be essential in making 3D STED a more widely used tool for tissue imaging."