Quantum cascade devices for the EU-funded pilot line can be wavelength-tuned at a rate of 1 kHz. 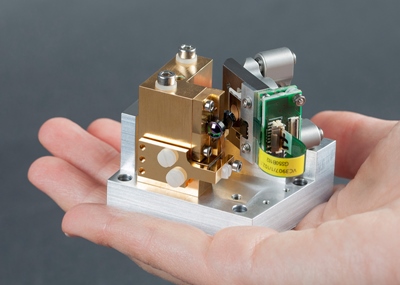 Three different Fraunhofer institutes involved in the European Union-funded pilot line project known as “MIRPHAB” say that they are helping to transform the production of quantum cascade lasers (QCLs) for future industrial applications.

Short for Mid InfraRed PHotonics devices fABrication for chemical sensing and spectroscopic applications, MIRPHAB officially kicked off at the start of 2016, and is set to run for four years with a budget of €17 million.

The plan is to provide a reliable supply of photonic components operating in the mid-infrared spectral region – also known as the “fingerprint” region, where the highly wavelength-specific vibrations of chemical bonds can be used to identify molecules.

Rapid switching
While the pilot line project is co-ordinated by the CEA-Leti laboratory in France, the three Fraunhofer institutes are closely involved with the provision of QCLs to provide the mid-IR light needed for the packaged sensor devices.

Team members at the Fraunhofer Institute for Applied Solid State Physics (IAF) in Freiburg and counterparts at the Fraunhofer Institute for Photonic Microsystems (IPMS) in Dresden have now developed a demonstrator version of a miniaturized source, comprising a QCL chip and a MEMS-based grating scanner that is able to switch wavelengths at a rate of 1 kHz.

“In this type of laser, the wavelength range in which the light is emitted is spectrally very broad and can be customized during manufacturing,” explain the Fraunhofer partners. “In order to select a specific wavelength within the wide spectral range, it has to be chosen via an optical diffraction grating and coupled back into the laser chip. By rotating the grating, the wavelength can be tuned continuously.”

Those gratings are made at IPMS, with more consortium members at the Fraunhofer Institute for Production Technology (IPT) in Aachen working on ways to optimize the production of both laser chips and gratings, with a view to series production and the kind of cost reduction that will be required for applications in industrial sensing, healthcare, or forensic science.

Automated process monitoring
Fraunhofer IAF points out that in such applications, for example to identify and monitor a specific chemical substance, a customer would typically have very individual requirements.

“This starts with the substances to be accounted for, [and] the number of required sensors, up to the speed of the production process,” it reports. “In most cases, a ‘one-size-fits-all’ solution is not sufficient, and several suppliers are needed in order to develop the optimal individual solution.”

With MIRPHAB, that changes – customers can access mid-IR sensor technologies tailor-made for their requirements, from a single source.

“Interested parties can address a central contact person, who then compiles the best possible solution from the component portfolio of the MIRPHAB members according to the modular principle,” say the Fraunhofer partners. “In addition, MIRPHAB gives companies access to the latest technologies, enabling them to gain an edge over the competition as an early adopter.”

With the ability to record up to 1000 spectra per second now available, monitoring and control of chemical reactions and biotechnological processes is possible in real time - suggesting that future deployments in "Industry 4.0" applications are likely.

Other QCL partners involved in the pilot-line effort include Switzerland-based Alpes Lasers, and the French company mirSense, which was spun out of the III-V Laboratory near Paris, previously set up by Alcatel-Lucent and now operated by Nokia, Thales and CEA.