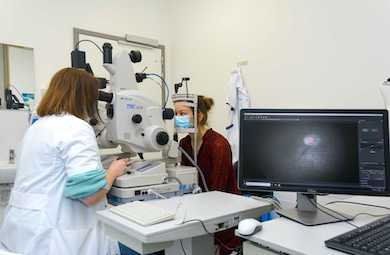 Diagnosis of Alzheimer's disease (AD) as early as possible in the progress of the condition continues to present a major global health challenge.

One potential bioimaging approach has been to look at the cells of a patient's retina, where evidence of amyloid plaque build-up was first indicated to be a possible biomarker for AD in 2015.

Subsequent research included the landmark US study undertaken in 2017, employing fluorescence imaging of the retina specifically as an alternative to other more complicated approaches to AD diagnosis.

Belgian research center Imec and university hospital UZ Leuven have now discussed results from a trial applying hyperspectral imaging to the task, as a means to more effectively search for the specific proteins of concern.

One particular focus was identification of the amyloid-beta protein, exploiting the decrease in spectral reflectance of retinal tissues between 460 and 570 nanometers that the presence of the protein can cause.

A proof-of-concept clinical study investigated whether a bimodal approach, using both hyperspectral imaging and optical coherence tomography (OCT), could more conclusively indicate the onset of AD.

In this approach, a snapshot hyperspectral image detects the spectral shift from amyloid-beta, while OCT quantifies structural changes in the retinal nerve fiber layer, changes known to be associated with degenerative disorders such as glaucoma, with the two optical techniques working in tandem.

"We quantified the amyloid-beta protein accumulation in the retina with the help of hyperspectral imaging, and studied the thinning of the retinal nerve fiber layer - a sign of neurodegeneration - with OCT," commented Imec's Sophie Lemmens.

The project collaborated with the Flemish Institute for Technological Research (Vito) using Imec's high-resolution Snapscan camera, said to capture 150 spectral bands over both the visible-and-near-infrared range from 470 to 900 nanometers, and the near-IR range from 600 to 975 nanometers.

The hyperspectral camera was combined with a standard fundus camera to create "a super-instrument with hyperspectral capabilities," according to Jan Theunis of Vito. "We succeeded in setting up a simultaneous operation of the fundus and snapshot, in achieving a large field of view, in acquiring a good image quality, and in adapting the image processing software and correction algorithms."

A clinical check-up for Alzheimer's disease

An initial clinical trial on a limited cohort of 17 patients has found that the bimodal approach and subsequent computational analysis could discriminate AD from healthy individuals, and could "use the hyperspectral and OCT measurements to make this decision with 75 to 80 percent certainty," according to Imec.

This approach could ultimately offer a way to diagnose cases of AD much earlier in the disease's development than is currently the case, and also refine therapy regimes through improving the analysis of drug trials and assessment of their results.

"Follow-up on the success of therapies in clinical trials could be done with this simple retina test," commented Lemmens. "And once effective treatments are available, hyperspectral retinal imaging becomes a suitable candidate for population-wide screening of patients at risk of developing AD."

Clinical translation of the hyperspectral platform could happen in a relatively short timeframe, since the core technologies are already developed and known to be patient-safe. Steps to commercialize the principle are currently being made by Mona, a spin-out from Vito working on development of retinal biomarkers for diagnosis and screening of several diseases of the eye.

"Just like you have regular screenings today for breast and colon cancer, doctors could use the eye test to follow-up on the disease in an objective, quantitative and patient-friendly way," said Ingeborg Stalmans of UZ Leuven, which has also studied the appearance of retinal plaque in mice as part of its research.

"Once we can also prove this for humans, and there are drugs available that are effective when administered in this early stage of the disease, people could have a yearly check-up with their ophthalmologist to check for eye pressure, artery quality, and AD."