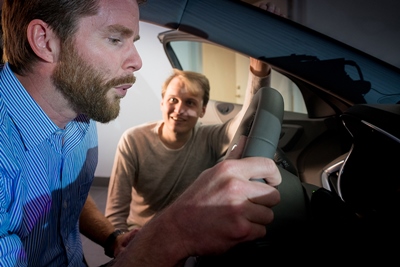 Authorities in Virginia, US, have begun evaluating a new photonics-based sensor that it is hoped will reduce the incidence of drunk-driving.

Data collection under way
According to a statement from Northam’s office, the first Ford Flex vehicles to feature the sensors started operating from Richmond and Norfolk international airports last month. Over the past three weeks, more than 1000 hours of sensor operation have been recorded, collecting data on both drivers and passengers.

It is hoped that the approach could help to reduce significantly the number of fatalities on US roads caused by drunk driving. According to statistics provided by the US National Highway Traffic Safety Administration (NHTSA), drunk driving is responsible for some 10,000 fatalities in the US every year. The figures for Virginia in 2017 include more than 7000 alcohol-related crashes, leading to 248 deaths.

“This technology will take the guesswork out of blood alcohol concentration measurements by letting a driver quickly, easily and reliably know if they are at or above the legal limit,” says the Driven to Protect organization. “Ultimately, this sensor would be programmable to a zero-tolerance policy for parents of teen drivers, or to a blood alcohol content of 0.08 per cent, the legal limit in nearly all 50 states.

Rob Strassburger, president and CEO of the Automotive Coalition for Traffic Safety, said in the Governor office’s release: “We are developing an unobtrusive system that doesn’t hassle sober drivers to help prevent drunk driving and save lives. The Alcohol Detection System will be offered voluntarily as a consumer option in the same way that other advanced vehicle technology features, such as lane departure warning or automatic emergency braking, are offered.”

Breath versus touch
Two years ago the NHTSA signed an expanded collaboration with Germany-based nanoplus under its program for a Driver Alcohol Detection System for Safety (DADSS), to develop lasers for a touch-based sensor system, in collaboration with TruTouch. DADSS had begun proof-of-concept work on the sensors as long ago as 2008.

During that time, both touch- and breath-based systems have been explored. But it appears that the adapted vehicles in Virginia – part of the James River Transportation commercial fleet – monitor ethanol levels in drivers’ naturally exhaled breath.

That could be due to technical difficulties with the touch-based approach. Earlier this year Craig Gardner from TruTouch published a paper in SPIE’s Journal of Biomedical Optics that compared the effectiveness of diffuse reflectance and transmission spectroscopy for a touch-based sensor – and found that the diffuse reflectance technique suffered from severe signal degradation.

According to the DADSS web site, the breath-based system draws a driver’s exhaled breath into a sensor that measures the concentrations of alcohol and carbon dioxide gas. The known quantity of carbon dioxide in human breath serves as an indicator of the degree of dilution of the alcohol concentration in exhaled air.

Senseair, which has been developing the breath sensor for DADSS, explains: "In state-of-the-art breath analyzers, the subject has to deliver a forced and prolonged expiration into a mouthpiece. This procedure is time-consuming and requires a significant effort for persons with reduced lung capacity. With our technology the subject can deliver a short puff of air at 5-10 cm distance to the sensor.

"Both alcohol and CO2 are measured using non-dispersive infrared spectroscopy (NDIR). We have built a powerful technology platform for NDIR analyzers."

DADSS now says that the data and feedback collected from the prototype breath sensors, as well as from the drivers tested, will be used to finalize the technology as it is prepared for “widespread commercialization”.