Optical technology among Artemis project payloads due to reach lunar surface in 2022. 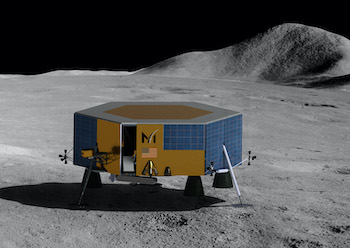 Moon with a view: imaging systems on board

Artemis is the ongoing US-led international manned spaceflight program created in December 2017, with the goal of landing "the first woman and the next man" on the Moon's south pole region by 2024. Named for the mythological twin sister of Apollo, the program is backed by $35 billion of funding.

As a step towards that target, NASA has contracted Masten Space Systems of California to deliver and operate eight payloads, with a total of nine science and technology instruments, on an unmanned lunar lander scheduled to be launched in 2022.

The payloads covered by the $75.9 million award include instruments to assess the composition of the lunar surface, test precision landing technologies, and evaluate the radiation on the Moon, making use of optics and photonics technologies to do so.

Discussing the Masten contract, NASA stressed the current Covid-19 pandemic would not hinder the envisaged timeline, stating that the Administration was now leveraging virtual presence and communications tools to make progress on its lunar exploration activities. The intention remains to deliver the unmanned lander, and Artemis more broadly, as they were scheduled prior to the pandemic.

"The Moon provides great scientific value, and these payloads will advance what we know and help define and improve the science astronauts can do," said Thomas Zurbuchen of NASA's Science Mission Directorate. "Our commercial Moon delivery efforts are seeking to demonstrate how frequent and affordable access to the lunar surface benefits both science and exploration."

The payloads to be delivered on the Masten XL-1 lander have been developed predominantly from two recent NASA solicitations, termed Provided Lunar Payloads and Lunar Surface Instrument and Technology Payloads. This in turn envisages nine instruments under the Masten contract, featuring a range of photonics instrumentation.

Commercial delivery of optical technology to the Moon

The photonics technologies scheduled for the lander now include:

• The Heimdall camera system developed by the Planetary Science Institute will contain four individual optical cameras. A wide-angle imager employed during the probe's descent will acquire images of the surface after landing at 500-microns per pixel resolution. A narrow-angle imager will image the lunar soil, or regolith, to determine particle size and shape, while two wide-angle panoramic imagers will image the local terrain in stereo for context and mapping, at resolutions of 5 millimeters per pixel at 10 meters distance.

• The Laser Retro-Reflector Array (LRA) is a collection of eight 1.25-centimeter retro-reflectors - surfaces which reflect radiation back to its source with minimum scattering. This mirror assembly, from NASA's Goddard Space Flight Center, will reflect laser light from other orbiting and landing spacecraft to precisely determine the lander’s position, the accepted technique for doing so.

These instruments, along with additional spectroscopic instrumentation and a small robotic rover christened MoonRanger, are designed to operate at the lunar south pole for at least 12 days.

Further opportunities for photonics technologies to play a role in lunar exploration are likely to follow, with NASA planning at least two "task orders" per year through which companies can propose instrumentation to be taken to the Moon. The Artemis program has been designed to allow early commercial deliveries of such instruments to the lunar surface, to perform experiments, test technologies and demonstrate capabilities, as preparation for human missions.

"With the first delivery in 2022, we are continuing to execute our strategy of providing two delivery opportunities per year of science investigations and technology demonstration payloads to the lunar surface," commented Steven Clarke of NASA.