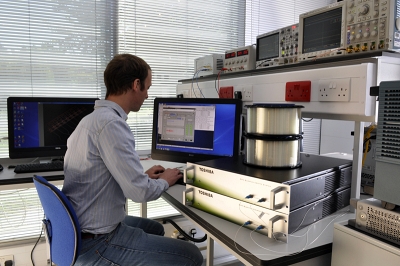 A new quantum key distribution (QKD) link in the UK represents the country’s first ultra-secure “industrial” network to be protected by the advanced photonics technology.

It is the result of efforts made under the £5.8 million Agile Quantum Safe Communications (AQuaSec) project, one of dozens funded as part of the UK’s National Quantum Technologies Programme.

Quantum milestone
According to BT, the QKD link replaces manual sharing of sensitive data using portable storage devices between the National Composites Centre (NCC) and Centre for Modelling and Simulation (CFMS), as well as the University of Bristol.

Instead of physically transmitting the data, it is now transferred at high-speed over 6 km of BT’s standard “OpenReach” fiber-optic cable, with the encrypted keys transmitted simultaneously.

BT and Toshiba Europe add that the same technology could be deployed over a maximum range of 120 km - suggesting that QKD is now feasible across a major metropolitan network.

Andrew Lord, the head of optical technology at BT, described the QKD deployment as a significant milestone on the way to a “quantum-ready” economy.

“We’re excited to be working alongside our long-term partner in Toshiba, as well as the NCC and CFMS as industry-leading bodies in the UK, to demonstrate the ultra-secure nature of quantum cryptography,” he said.

“The power of quantum computing offers unprecedented opportunity for UK industry, but this is an essential first step to ensure its power can be harnessed in the right way and without compromising security.”

Andrew Shields, who has led the development of QKD technology at Toshiba Europe for several years, emphasized that the approach can be implemented on standard BT fiber infrastructure, and is applicable in a wide range of scenarios.

“With the UK government’s assertion that it wants to be the ‘world’s first quantum-ready economy’, quantum-secure networks are vital to it achieving this ambition, and we’re excited to be at the forefront of making this a reality,” Shields added.

• During last week’s SPIE Security and Defence Digital Forum, several of the leading figures in the UK’s emerging quantum sector took part in a panel session discussing commercialization of the new technologies now being demonstrated, including QKD.

The panel concluded that while the well-funded UK scheme had all the necessary ingredients to provide a viable quantum technology supply chain, a critical requirement now was to persevere with prototypes and products while stimulating early adopters to ensure that component providers had a market to sell into. The latest QKD deployment by BT and Toshiba Europe could be seen as an example of such adoption, using public procurement.

Other crucial topics under discussion included the need to develop industry standards to help create international markets for quantum technologies, while being mindful of likely domestic interests in defense and security applications.

Access to skilled workers was another major talking point, with panelists urging more action to attract students into the quantum sector - partly by de-mystifying the technology, and pointing out that although engineers might need to be conversant with quantum concepts and terminology, a deep knowledge of the physics of quantum mechanics was not a typical requirement.