Up to $410M from iPhone maker’s ‘Advanced Manufacturing Fund’ to boost production capacity and performance. 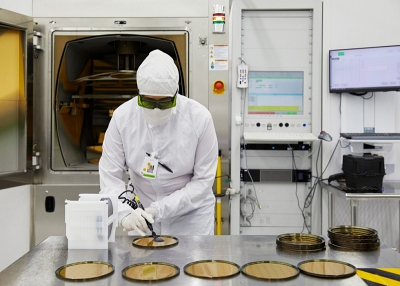 II-VI, the US firm that is set to become arguably the biggest photonics company in the world once it completes a merger with Coherent, has reported a sharp annual uptick in revenues.

At $783 million, sales for the quarter ending March 31 were up 25 per cent year-on-year - although down slightly on the final calendar quarter of 2020.

Announcing financial results that beat the company’s February forecast, CEO Chuck Mattera said: “Our supply chain and global manufacturing operations teams kept pace with demand to deliver above the top end of our guidance, and we are optimistic about the future.”

Pre-tax earnings of $93 million were also up significantly on the figure of $33 million posted by the firm a year ago.

Caution over chip shortage
According to a company presentation, 65 per cent of sales in the latest quarter related to optical communications, with II-VI’s chief strategy officer Giovanni Barbarossa noting a boom in orders for optical transceivers related to both a strong market and share gains.

The acquisition of Coherent promises to make for a much more balanced portfolio - particularly in the area of industrial lasers, which currently account for just over 10 per cent of II-VI sales.

“The combination will expand our access, and diversify our exposure, to global markets and provide us with new opportunities to expand our service and sales network around the world.”

Mattera and his team believe that the acquisition will give the company an unparalleled breadth and scale in photonics as “megatrends” like 5G deployment, electric vehicles, and artificial intelligence drive demand for all manner of optics-related components.

However, the CEO urged some near-term caution amid the global shortage of electronic components that has disrupted several industries, most notably the automotive sector.

“When the CEO of Intel says [that] shortages will continue for a couple of years, you have to pay attention to that,” Mattera told investors discussing the latest results on a conference call with II-VI executives. “We have great confidence in our team, but there’s only so much they can do.”

Apple boost
The Pittsburgh-headquartered company has also received a new pledge of support from key customer Apple, which has awarded II-VI $410 million from its “Advanced Manufacturing Fund”.

The consumer electronics giant’s support has been a major factor in II-VI’s retro-fitting of the giant VCSEL fab in Sherman, Texas, that was mothballed in 2012 by previous owner Texas Instruments.

Back in 2017 Apple signed a similar $390 million deal with Finisar, before it was acquired by II-VI two years later.

“The partnership between Apple and II-VI sets the stage for a new wave of breakthrough technologies that we believe will enable a wide range of applications that will benefit our world for decades to come,” said Mattera.

Barbarossa told investors that the deal with Apple represented a commitment to purchasing some new and emerging products such as the multi-junction VCSEL arrays launched by II-VI earlier this year.

• Looking ahead, Mattera and his team said that sales in the current quarter could end up anywhere between $752 million and $802 million.

In early market trading on the Nasdaq following the earnings release, II-VI’s stock dropped in value by around 5 per cent. Since joining the Coherent bidding war in mid-February, II-VI’s stock has fallen away from all-time high valuations of close to $100 and is currently valued at just over $60, equivalent to a market capitalization of around $6 billion.