Quantum technologies for computing, comms and imaging at Hannover Messe 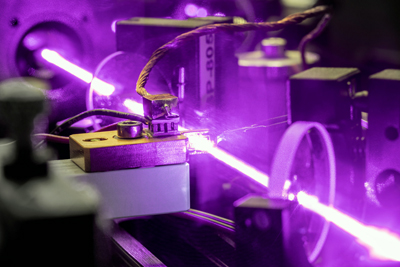 Optics- and photonics-dependent quantum technologies continue to proliferate. The Fraunhofer Institute for Applied Optics and Precision Engineering (IOF) is set to showcase its latest such technologies for the future markets of computing, communication and imaging at Hannover Messe Digital Edition, running from April 12 to 16. Free tickets are available on request from the institute.

Under this year’s theme of “Industrial Transformation”, the Hannover Messe is once again inviting (virtual) visitors to take a look at the latest technologies from the fields of industry, business and logistics. The IOF will present a complementary and comprehensive portfolio of quantum technologies.

Considering the fields of biomedicine and diagnostics, an imaging system developed at the IOF based on “quantum light” enables the spectral separation of the illumination of a sample and the corresponding detection on the camera.

This means that different wavelengths can be used for the exposure of a sample and the readout on the sensor. In this way, new spectral ranges can be made accessible for analysis. At the same time, the efficiency of the detection systems can be increased and the beam load for tissue images reduced. 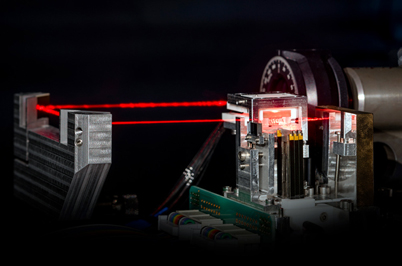 The quantum computer is expected to trigger significant changes for business and industry, but also for society. The quantum computer makes use of quantum effects such as entangled photons. Its computing units, so-called "QuBits", can assume several states at the same time. This allows significantly faster and more efficient operations.

The IOF develops optical and precision mechanical components and systems for these next-generation computers. Among other things, laser addressing units for manipulating ions and atoms as carriers of qubits were realized at the institute during 2020.

As part of AQTION, a project under the European Union's Quantum Flagship Program, these addressing optics will be integrated into an ion trap at the University of Innsbruck, in which up to 50 ions are arranged as qubit information carriers in a later expansion stage.

Quantum computers will also make it necessary to rethink current communication systems. Already today, such computers challenge our information technology security because of their enormous computing power. Data can now be stored and later be encrypted with the help of more powerful computers. Therefore, new encryption technologies are needed to protect business from cyber attacks. 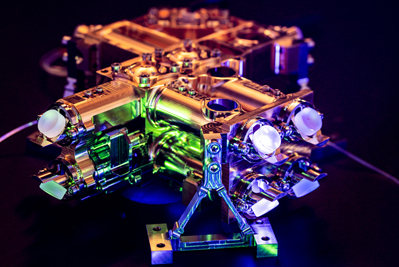 A source for the generation of entangled photons.

One such new technology is quantum key distribution (QKD). Researching QKD is the main objective of “QuNET”, a research initiative of the German Federal Ministry of Education and Research (BMBF). Within this project, Fraunhofer IOF is, together with other research partners, creating the basis for secure and robust IT networks based on quantum technologies. Researchers from the institute will also be providing information about "QuNET" at the BMBF’s stand at Hannover Messe.

A key technical component for state-of-the-art quantum communication is a stable source for generating entangled photon pairs that can be easily integrated into existing systems. An Entangled Photon Source (EPS) has been developed at the IOF.

It is designed for use in space and allows secure quantum communication via satellite network. The light source presented at the HANNOVER MESSE is representative of a series of highly specialized quantum sources adapted to the requirements of various application scenarios. They are being developed as part of the newly established network at Fraunhofer IOF for applied photonic quantum technologies. 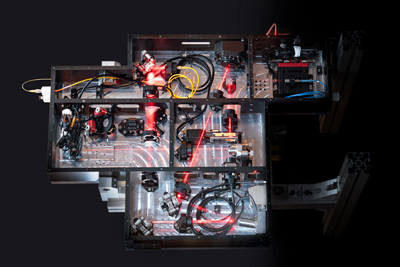 To be universally applicable, scientific teams are working within the framework of “QuNET” to realize quantum communication over different distances. In Jena, optical free-beam systems are being researched for this purpose.

A special telescope platform is currently being tested, which allows a free-beam link to be established between two communication partners in a short time. The core of the system is an efficient metal mirror telescope in combination with active beam stabilization. This makes it possible to establish links within cities with distances of several hundred meters or several kilometers.

In addition, free-beam systems must be able to traverse the turbulent atmosphere without causing interference to the signal. Such disturbances can be corrected by adaptive optics.

Researchers at the IOF have developed adaptive optical modules - also known as "AO boxes" - for this purpose. An AO box, which can be used in an optical ground station or telescope, corrects turbulence-induced wavefront errors or compensates them preventively. The signal can then be measured or transmitted to a fiber network.