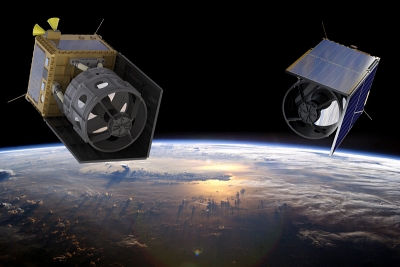 Orbital Sidekick (OSK), a San Francisco startup with plans to launch a constellation of hyperspectral imaging micro-satellites, has raised $16 million in series A venture funding.

Coming just a few months after the company landed a $16 million contract with the US Air Force, the additional capital should see OSK start to offer commercial imaging services next year.

Having previously collected and analyzed hyperspectral data captured by the International Space Station, OSK is due to launch six hyperspectral satellites from a SpaceX Falcon 9 rocket in the first quarter of 2022.

The payload should produce the highest resolution commercial hyperspectral imagery ever made available, with a claimed GSD (ground sampling distance) of approximately 8 meters.

Compared with existing monitoring systems, OSK says that its high spectral resolution in the visible and infrared spectral range (400-2500 nm) offers a 20-fold improvement in sensitivity - at just one tenth of their cost.

“This daily monitoring of chemical change on a local and global scale will replace ineffective, invasive, and costly ground-based and aerial sensor systems,” states the firm on its web site, pointing out that some 90 per cent of current pipeline monitoring resources are effectively wasted on what turn out to be "non-issues".

Beyond pipeline monitoring, OSK says that the constellation will be able to help spot outbreaks of wildfires thought to be proliferating through a combination of climate change and deforestation.

The company is also looking to deploy its analytics platform for global emissions monitoring, clean energy exploration, and mineral detection.

Asset monitoring
CEO and co-founder Dan Katz commented: “The OSK business model is naturally aligned with improvements sought by the energy and space sectors during this and coming years.

“By bringing new investors Temasek and Energy Innovation Capital on board, we are now able to strengthen our commitment to providing improved asset monitoring services for traditional energy infrastructure while expanding product offerings that support environmental sustainability and clean energy exploration.”

Founded in 2016 by Katz and COO Tushar Prabhakar - both designers of small satellites at Space Systems Loral previously - OSK raised $3.5 million in a seed funding round led by Boston-based Allied Minds in July 2018.

Allied Minds also took part in the series A round just completed, which was led by Singapore investor Temasek, alongside participation from Energy Innovation Capital plus existing investors 11.2 Capital, and Syndicate 708.