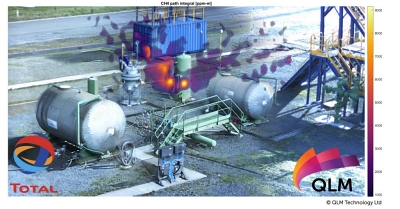 The injection of new cash - provided by lead investor Green Angel Syndicate but also featuring a local private equity club and Houston-based oil technology firm ChampionX, among others - is set to help QLM expand its technical and commercial teams, achieve industrial validation and orders, and boost its patent portfolio.

“The multidisciplinary consortium of green investors, technology accelerators, and oil and gas industry professionals shares QLM’s vision of enabling organisations to achieve Net Zero (sic) through mitigation of greenhouse gas emissions,” announced the startup, which is in the process of launching its first commercial cameras.

“This funding round will enable us to scale up our development and launch our business providing next-generation greenhouse gas monitoring. Our unique quantum lidar is the right solution for the challenge of how to effectively measure industrial methane emissions, and meet the major commitments that the oil and gas majors have made to control their greenhouse gas emissions.”

Methane cameras
Founded by CTO Xiao Ai, QLM’s technology is based on gas spectroscopy with single-photon detectors. The “TDlidar” technique is able to build up a lidar-generated image of key greenhouse gases such as methane or carbon dioxide, such that leaks in pipelines or gas storage facilities can be rapidly visualized and quantified.

The company’s initial focus is expected to be on methane, which is present in much lower concentrations than carbon dioxide but is far more potent in terms of its climate heating effect.

However, methane also has a much shorter atmospheric lifespan than carbon dioxide, meaning that efforts to mitigate leaks and other emissions sources ought to have a much faster impact.

Quantum lidar cameras promise to tick those boxes at a much lower cost than the existing “gold standard” monitoring solution - differential absorption lidar (DIAL). While undeniably effective, DIAL systems are so large that they must be transported by truck, and cost upwards of £100,000. At the other end of the scale are low-cost gas “sniffer” sensors.

Initially, the methane cameras will be fixed, CCTV-like surveillance systems, mounted on masts, poles, or tripods, with rotational and up-down motion.

The cameras are capable of fully traceable quantitative methane detection at gas concentrations between 100 and 150,000 ppm-meters, and a range of 200m.

Users will see a “heat map” of methane concentrations superimposed on the site of a leak or emission, in near-real-time, while the leak rate of the gas can be measured and displayed after just ten seconds of data collection.

SPLICE development
Much of the development effort has taken place within the UK’s “SPLICE” (Single Photon Lidar Imaging of Carbon Emissions) consortium, which features the likes of the National Physical Laboratory, BP, and National Grid, among others, and is underpinned by the UK’s National Quantum Technologies Programme.

Trials of the QLM cameras at National Grid gas terminals in Scotland are scheduled later this year, with the power industry expecting regulations on methane leaks to be tightened in the near future.

BP has said that it plans to install monitoring sensors at all of its sites by 2023, noting that if methane emissions are not controlled then natural gas is no better than oil from a climate point of view.

QLM said previously that although its first commercial orders are emerging from the oil and gas industry for emissions monitoring, the company is expecting to diversify into biogas and landfill gas-to-energy (LGTE) monitoring, plus other environmental and agricultural deployments in the longer term.

Beyond methane, QLM is also planning to commercialize a carbon dioxide camera and expand to other wavelengths suitable for applications in the petrochemical, agricultural, and transportation sectors.

Other priorities include shrinking the technology - perhaps using MEMS in place of the current prism optics - to make the approach compatible with UAVs, robots, and handheld platforms.