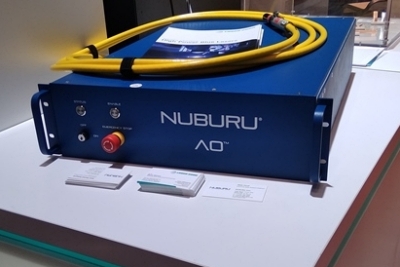 That’s according to Mark Zediker, CEO of the blue industrial laser specialist Nuburu, who outlined models showing that good eye safety and atmospheric propagation were possible with a 468 nm laser - contrary to what might be expected.

Presenting during the SPIE Defense and Commercial Sensing (DCS) Digital Forum this week, Zediker also highlighted that although the shorter-wavelength technology is at a much earlier stage of development, it is catching up with infrared equivalents and could end up as a better option - potentially reducing target destruction times by half.

“We have shown that the blue laser technology is advancing quite rapidly,” said the CEO. “We have also shown that, because of the higher absorptivity of the materials that [typical] targets are made of, the short-wavelength HEL system would have a major advantage over an IR system today.”

Higher absorption
Crucial to the potential advantages of a blue laser weapon system is the fact that virtually all materials - and metals in particular - have a significantly higher absorption in the blue and green parts of the spectrum than in the infrared.

That is the thinking behind the primary Nuburu business case, which is aimed at industrial materials processing, particularly for applications involving highly reflective metals like the copper alloys used in electric vehicle batteries.

“The premise is simple,” said Zediker. “For every material out there, the absorption characteristics of laser energy in the blue wavelength regime is much higher than it is in the infrared.”

And although the current state-of-the-art for blue sources is well behind the infrared diodes and bars developed over the past two decades, that performance gap appears to be shrinking rapidly.

Zediker said that the best blue single emitters now deliver 13 W and an efficiency of 40 per cent, while diode bars can produce as much as 90 W.

The Nuburu CEO pointed out that the emerging field has been able to learn lessons from infrared diode development, with blue emitter performance improving rapidly and “no barriers” anticipated in reaching the 70 per cent efficiency mark.

While target destruction is the most obvious metric to judge a weapon by, Zediker also pointed out how a blue laser would be able to dazzle or destroy a drone camera much more easily than an infrared source, because of the much higher “in band” radiation that would hit the camera sensor.

Another, less obvious advantage could be found in system design, because the blue lasers operate at a much higher temperature than infrared equivalents - meaning much less complex cooling requirements.

Model behavior
Regardless of that potential, it has generally been thought that shorter-wavelength sources would be much more susceptible to atmospheric turbulence effects that would limit weapon capability, while eye safety would present another major concern in the visible realm.

However, Zediker said that initial modeling work carried out by two independent specialists in the field now suggested that these two issues would in fact be much less problematic than many might presume.

“I’ve always assumed that shorter wavelengths were more susceptible to aberrations caused by turbulence,” Motes said. “But until I did the math I didn’t realize that it was a minor effect.”

In fact, he reported, this minor effect means that a blue laser only has slightly larger divergence angle than the kind of infrared laser currently used in laser weapons that are nearing military deployment.

Commenting on Motes’ work, Zediker indicated that although the simulation showed much finer structure in the blue laser output (the delivered beam looks messier over a 10 ms time frame), the energy deposited by the two sources was virtually identical.

“A blue laser beam is capable of being delivered to the target with efficiencies approaching [that of] an infrared beam,” stated the Nuburu CEO.

‘Kill time’ halved
For further analysis Zediker turned to another expert - Jim Davis from consultancy Booz Allen Hamilton. Presented at last year’s Directed Energy Systems Symposium, Davis’ model showed that a 300 kW blue laser weapon would have advantages over an infrared equivalent when used at typical aircraft altitudes - largely because of the smaller spot size associated with the shorter wavelength.

Calculations of the wavelength’s impact on a target missile featuring a titanium skin indicated that the blue laser weapon would have a “kill time” half that of the infrared system.

“Absorbed fluence is 50 per cent higher for blue versus infrared,” Zediker said, pointing out that the effect would be even more marked for nickel, which has a higher absorption in the blue. The wavelength advantage is less significant in aluminum - a material used widely in defense and aerospace - while surface roughness, paint, and oxidation would all have an additional effect.

Further studies by Nuburu have shown that it is possible to “clean up” the low-brightness emission from a blue diode and convert it into the kind of singlemode output required for good beam propagation, while eye safety is aided by much more efficient scattering and absorption by targets.

“This is a compelling story,” said the CEO. “It needs further investigation, [and] a more detailed system analysis needs to be performed, to make sure we really understand the capabilities of the technology.

“We also need investments in scaling the technology. While Nuburu has shown that this technology is feasible for beam cleanup, it certainly needs to be scaled to high energy levels, and tested to validate the models that have been used.”

• The SPIE DCS Digital Forum is taking place 12-16 April. Registered attendees are able to watch recorded presentations on demand (paid registration is required for some events and presentations).