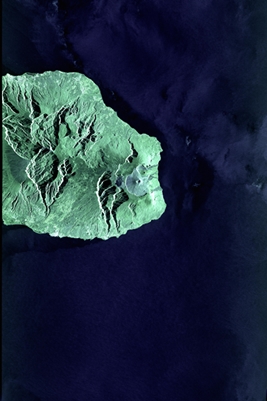 Satellite images of La Reunion Island, near Madagascar in the Indian Ocean, have become the first to be transmitted using the European Space Agency’s new dedicated high-speed laser system.

Speaking at the Berlin Air Show, ESA’s director of telecommunications and integrated applications said: “With today’s first link, EDRS (the European Data Relay System) is close to becoming operational, providing services to the Copernicus Sentinel satellites for the European Commission.”

This time Sentinel-1A transmitted two images of La Reunion Island to the EDRS-A “node”, a dedicated laser terminal for the EDRS system that was launched in January.

It means that the world’s first laser relay service for satellite imagery, which will be able to return high-resolution and wide-swath radar data back to Earth much more quickly than conventional links based entirely on radio-frequency transmission, is almost ready for commercial operation.

“EDRS will dramatically improve access to more urgent and potentially life-saving coverage from space than ever before,” said ESA.

Time-critical imagery
The space agency added: “Satellites like the Sentinels can help to survey areas struck by natural disasters. When the situation on the ground is changing rapidly, hours-old satellite information is of little use to rescue teams. EDRS will allow access to time-critical data acquired around the world.”

ESA also noted that the laser transfer between the two satellites was fully automated: EDRS connected to the Sentinel from a distance of more than 35,000 km, locking on to the laser terminal and holding that link until transmission was completed.

Although this initial imagery was sent at a 600 Mb/s transfer speed, the laser terminal is capable of operating at three times that speed. Once fully operational, it will enable EDRS to relay 50 terabytes of data every day.

ESA plans to launch two more laser terminals for the EDRS system, one next year and another in 2020 that will operate over the Asia-Pacific region and yield global coverage. In the meantime, commercial operation is set to begin this summer, with data relay for the International Space Station scheduled to start in 2018.

Optical downlinks
While EDRS still represents a hybrid optical/RF system - a radio link is used to relay data to ground stations on Earth - others are attempting to establish fully optical links between Earth and space.

Examples include NASA’s Optical Payload for Lasercomm Science (OPALS) mission, which launched in 2014 and uses adaptive optics technology including a MEMS-based deformable mirror from Boston Micromachines to correct for atmospheric turbulence.

In addition, engineers at the Massachusetts Institute of Technology’s “STAR” lab are working on a laser transmitter system compatible with tiny cubesats (see video below). Dubbed the “nanosatellite optical downlink experiment” (NODE), it uses a laser communications module weighing less than a kilo, delivering a 200 mW downlink beam at 1550 nm that can be captured with a 30 cm-aperture ground station.