Renishaw for sale after founders offer up majority stake

Renishaw, the UK-headquartered company that specializes in precision metrology equipment, is up for sale, after the firm’s two co-founders said that they plan to sell their majority shareholding.

Together, Sir David McMurtry and John Deer - who set up the firm in 1973 - own 53 per cent of the company’s share capital. Having traded on the London Stock Exchange since 1988, the company’s shares are currently trading close to an all-time high, with a market capitalization in the region of £4.4 billion.

The two founders are both now in their eighties, and have said that their preference is to sell their entire combined shareholding.

Having considered the options available, Renishaw’s board of directors has decided to launch a formal sales process.

“The board intends to seek a buyer who will respect the unique heritage and culture of the business, its commitment to the local communities in which its operations are based, and who will enable the company to continue to prosper in the long-term,” announced the firm.

Encoder and Raman demand grows
Among Renishaw’s various photonics-related activities are a variety of optical and interferometric laser encoders that provide precision measurements of linear and rotary position - used in applications ranging from machine tools and the aerospace industry to semiconductor device fabrication.

In addition, the company sells several different Raman spectroscopy tools, which are used across a number of scientific and industrial applications. Renishaw has also become a provider of laser-based additive manufacturing systems in recent years, specifically focusing on 3D printing of metal parts.

According to last month’s interim financial results, Renishaw’s sales in the six months ending December 31, 2020, were down 2 per cent on the prior year at £255 million - although the company said that demand for optical encoders had grown in recent weeks, thanks to a solid recovery in semiconductor and electronic device production. 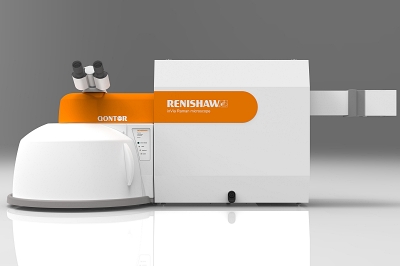 Renishaw added that, although much smaller than its metrology business, its Raman tools were also in demand, with sales of spectroscopy equipment up 10 per year-on-year at £20 million.

The company reported a sharp increase in pre-tax profits, attributed to its “Fit for the Future” strategy that saw Renishaw lower its headcount by around 600 people in a resizing of the business that also incorporated a restructure of the additive manufacturing unit.

While labor costs dropped about £10 million year-on-year, Renishaw said its profits had also benefited from lower operating costs elsewhere, most evidently in travel and exhibitions resulting from pandemic-related restrictions.

“We expect these costs to increase once restrictions are lifted, although we do not expect travel to return to pre-pandemic levels as the use of online meetings has proven an effective tool for many communications,” noted the firm.

‘Exceptional stewards’
Commenting on the decision to sell their holdings in the company, McMurtry and Deer said: “We are both grateful for our continued good health, however we recognize that neither of us is getting any younger.

“Now finding ourselves in our 80s, our thoughts have increasingly turned to considering the future of our shareholdings in the company and how we can actively contribute to securing the future success of the business.

“With that in mind, we approached the rest of the board to indicate that we felt the time was now right to discuss the best way to achieve this.”

Responding to the decision Sir David Grant, a senior independent non-executive director on the Renishaw board, added:

“David and John have been exceptional stewards and majority holders of Renishaw as evidenced by the company's long-term track record of innovation, success and value creation.

“Following the indication from David and John that they would like to sell their shares, my fellow directors and I have thoroughly considered various alternatives in partnership with our advisers.”

Having considered those options, Grant says that the board came to a unanimous conclusion that the best option was to investigate a possible sale of the company, and to begin a formal sale process.