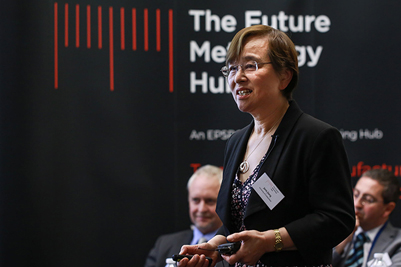 Scientists at the University of Huddersfield, UK, have been awarded a £5.5 million ($7 million) grant for a five-year research project intended to develop new techniques for ultra-accurate measurement at the nanoscale.

Novel miniaturized sensors will enable automated production lines to detect and correct errors in situ, without parts having to be removed for offline measurement. This will deliver much greater efficiency and cost savings plus lead to the ability to manufacture short runs of bespoke items, says the team led by Centre for Precision Technology (CPT), where Professor Jiang works.

The CPT has teamed up with Professor Nikolay Zheludev, FRS’s Nanophotonics and Metamaterials Group in the Zepler Institute for Photonics and Nanoelectronics at the University of Southampton. The two research groups will share the funding for the program, called Next Generation Metrology Driven by Nanophotonics.

The project is funded by a Programme Grant from the UK’s Engineering and Physical Sciences Research Council (EPSRC). These awards are intended to support researchers, bringing together "best with best" teams to undertake a variety of activities focusing on one strategic research theme. This is also the first time that a Programme Grant has been awarded to the University of Huddersfield.

One of the CPT team at Huddersfield involved in the new project is Dr Haydn Martin, who explained that there is a limit to the extent that conventional optics, such as glass lenses, can be miniaturised and embedded in the sensors necessary for Industry 4.0 to achieve its potential.

However, nanophotonics, the study of light on the nanoscale, allows the production of tiny, flat lenses from novel meta-materials. These lenses are potentially just tens of microns in thickness.

“Traditional factories are very good at making lots of similar things," said Dr Martin, "but the Industry 4.0 concept is all about automation and autonomous manufacturing, so that it is possible to send in a design and the manufacturing platform can then configure itself, with artificial intelligence supporting all the activity in the background.”

“To do this, you need a much greater incorporation of metrology, because you are asking the tooling to do many different things rather than the same thing over and over again.” 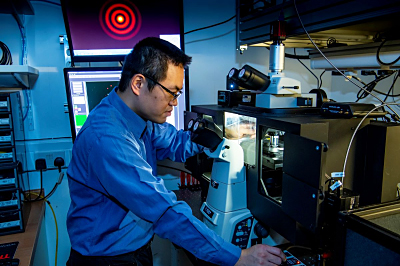 “The new program will translate the latest advances in nanophotonics, plasmonics and metamaterials research, in which the Zepler Institute has played an internationally-leading role, into future-ready applications. This will have a transformational impact on optical metrology by enabling cheaper, smarter and much more compact solutions.”

Professor Zheludev, Deputy Director of the Optoelectronics Research Centre, commented: "Using new nanophotonic components and concepts, we will develop metrology tools and measurement techniques that can be deployed in the real-world and will explore novel metrology concepts for nanotechnology.

“These advances will be vital to support the high-value manufacturing sector in the UK. The impact of this work, however, will be felt across a far broader range of disciplines, as size and weight are significant issues in, for example, instrumentation for space science, optical instrumentation for surgical applications, and robotic arm-mounted instruments.”

Ground-breaking ideas proposed in the project include an 'optical ruler' for measurements with potentially sub-nm resolution on the tip of an optical fibre and a new approach to motion imaging, based upon the scanning electron microscopy platform and delivers atomic level resolution.

The work is supported by project partners including major metrology instrumentation companies Taylor Hobson and Renishaw, as well as QinetiQ, Qioptiq, and academic partners at Nanyang Technological University, Singapore. The programme has been funded by the Engineering and Physical Sciences Research Council (EPSRC) and will run until January 2026.