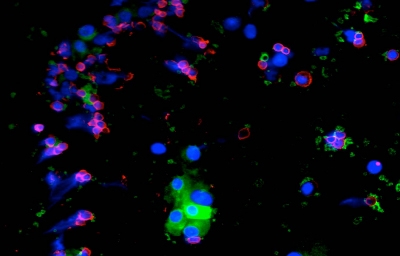 A new laser-based method capable of detecting so-called circulating tumor cells (CTCs) that are responsible for spreading cancer in the body has shown promising results in a pilot study on 14 melanoma patients.

According to the team at Pittsburgh-based Acousys Biodevices and local medical centers, which tested archived blood samples with the photoacoustic flow cytometry kit, the approach could become a powerful prognostic tool for melanoma cases if further tests back up the initial findings.

They presented a poster detailing the findings at the annual conference of the American Society of Clinical Oncology (ASCO), held in Chicago this week.

Prognostic tool
Of the 14 patients, eight remained disease-free for two years while six went on to develop metastatic cancer. Analyzing blood samples that were taken at the time of diagnosis, the laser technique picked up signs of circulating melanoma cells in five of the six patients whose cancer subsequently spread. Of the eight patients whose disease did not spread, six showed no signs of CTCs but two did.

Acousys’ chief scientific officer John Viator, who is also director of biomedical engineering at Duquesne University in Pittsburgh, claimed: “The data suggests we have a strong prognostic tool which warrants further testing for its ability to accurately detect early metastasis, capture intact CTCs and guide the management of advanced stage melanoma patients.”

The team believes that the photoacoustic flow cytometry tests could be used in combination with other key factors, such as a patient’s age and gender, to create a sophisticated model capable of accurately predicting whether their melanoma will spread.

"We are able to assure zero false positives through our staining validation once we isolate cells," the company added. "The question is what number of cells are indicative of early metastatic disease. Our hope is that there will be a level of demarcation that supports treating stage 3 patients and not waiting for imageable tumors [to develop]."

Viator also says that it could be valuable in managing other types of cancer where CTCs are known to be important predictors of metastatic disease, for example pancreatic, breast, and lung tumors.

“With our photoacoustic technology, we aim to usher in a new era of therapy in which advanced cancer is fought cell by cell, rather than against large, macroscopic tumors as is current practice,” he added.

Ultrasonic signature
Like other forms of photoacoustic technology - a technique that is also being tested for its ability to image primary tumors - the Acousys equipment exploits the phenomenon that certain cells and tissues dissipate energy by generating ultrasound after absorbing laser light pulses.

In the flow cytometry approach developed by Viator and Acousys, pigmented circulating melanoma cells or tagged CTCs can be detected, as well as other naturally absorbing species. In the discussion part of their poster, the researchers report that hemozoin crystal from malaria and bacteria labeled with bacteriophage can also be picked up.

Healthy blood cells do not absorb at the 532 nm frequency-doubled Nd:YAG laser wavelength used, and so do not generate an ultrasonic signal.

While the approach is yet to be approved by the US Food & Drug Administration (FDA), the most promising application does look to be making accurate prognoses for patients with the most dangerous form of skin cancer.

Viator and colleagues said of their plan to develop a predictive model incorporating the CTC analysis: “This model will enable a new paradigm in clinical care, as early-stage melanoma patients will be managed with regard to their risk of metastasis.

“Rather than waiting for conventional imaging to reveal metastatic spread, photoacoustic flow cytometry will use data on CMCs [circulating melanoma cells] to predict metastasis, allowing for monitoring and treatment of earlier-stage patients. Earlier management of melanoma may minimize the need for more aggressive treatment, such as surgery and high-dose chemotherapy.”

Acousys CEO Dominic Spadafore told optics.org: "Our intention is to use the archived samples to demonstrate the clinical utility of the measurement before we pursue regulatory approval which will likely involve a strategic partner."