Mini-laser based chemical sensor mounted on a chip 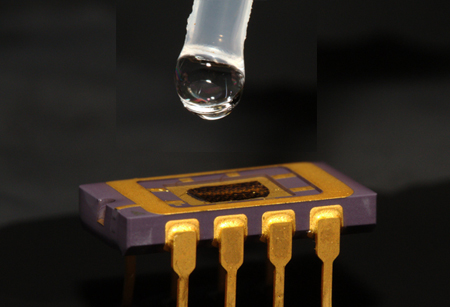 Laser-sensor: just a drop is enough to test chemical composition.

Infrared laser beams are absorbed differently by different molecules and so are well-suited for analyzing liquids and gases. This effect can for example be used to measure the oxygen concentration in blood. Researchers at Vienna University of Technology, Austria, have adapted this technique and miniaturized a device as the prototype for a novel sensor.

Dedicated quantum cascade lasers and light detectors are created by the same production process, in which the gap between laser and detector is only 50µm. This is bridged by a plasmonic waveguide made of gold and silicon nitride. This new approach allows for the simple and cheap production of tiny sensors for many different applications, as just reported in Natue Communciations.

Quantum cascade lasers are composed of an optimized layer structure of different materials, allowing properties like wavelength to be tuned. When a voltage is applied to the layer structure, the laser emits light. But the structure can also work in reverse; when irradiated it generates an electric signal is created.

The TUV scientists have developed a method to create a combined laser and detector at the same time, ona single chip, such that the wavelength of the laser perfectly matches the wavelength to which the detector is sensitive. This bifunctional material was created atomic layer by atomic layer at TUV’s Center for Micro- and Nanostructures.

“As both parts are created in one step, laser and detector do not have to be adjusted. They are already perfectly aligned”, said project researcher Benedikt Schwarz. ”In conventional systems, the laser light has to be transmitted to the detector using carefully placed lenses. Alternatively, optical fibers can be used, but they usually transport all the light inside, without letting it interact with the environment, and therefore they cannot be used as sensors.”

In the new laser-sensor the optical connection between quantum cascade laser and detector works in a completely different way. It is a plasmonic waveguide, made of gold and silicon nitride. Schwarz added, “The light interacts with the electrons in the metal in a very special way, so that the light is guided outside the gold surface, which is why the light can be absorbed by the molecules on its way between laser and detector.”

The sensor chip can be submerged in a liquid. By measuring the decrease of the detected light intensity due to the presence of light absorbing molecules, the composition of the liquid can be determined. The sensor was tested with a mixture of water and alcohol. The water concentration can be measured with an accuracy of 0.06%. As the wavelength can be influenced by changing the design of the layered structure, this sensor concept can be applied to a wide variety of molecules such as carbohydrates or proteins, for many different applications in chemical, biological or medical analytics. 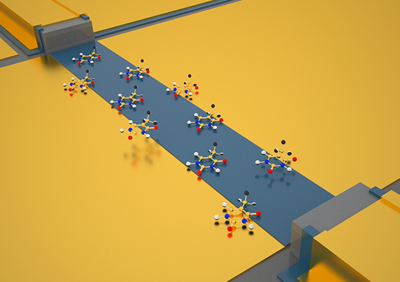 Infrared light is carried by plasmonic waveguide (left to right) to the detector.

The Nature Communications paper explains how the TUV researchers created their laser-sensor: “The monolithic device comprises a laser, a surface plasmon polariton (SPP) waveguide as well as a detector integrated on a single chip. For the laser and the detector a bi-functional QCLD is used. This active region can be used either as a laser or a detector depending on the applied bias. The laser light is coupled through an SPP waveguide, acting as interaction zone, to the detector.

"Owing to the evanescent nature of SPPs, 96% of the mode stays outside and interacts with the chemicals. The waveguide is fabricated with a thin dielectric stripe (200nm across) on top of an unpatterned gold surface, thereby solving two major issues. First, the weakly-confined mid-infrared SPPs are squeezed, enabling the propagation of strongly-bound SPPs and their direct coupling from and to ridge waveguides. Second, by eliminating the metal edges in the waveguide, the propagation length of narrow SPP waveguides (15μm) is increased by one order of magnitude.

"The fabricated devices with 50 and 100μm waveguide lengths show coupling efficiencies of 30–50%. At room temperature, the laser has a peak output power of 200mW and the on-chip detector has an internal quantum efficiency of 33%. Owing to direct coupling from the waveguide and the optimized quantum design, the on-chip detector provides a better performance than discrete QCDs. In order to demonstrate the functionality of the on-chip sensor, we submerged the device into a water-ethanol solution. With a waveguide length of 50μm, the device covers a high dynamic range of concentrations (0–60%).

"Without any compensation for pulse-to-pulse intensity fluctuations, we achieve a sensing resolution of 0.06%. This clearly demonstrates that monolithic integration is not necessarily connected with large performance limitations. Furthermore, our approach allows a straightforward and cost-saving fabrication, as no sub-wavelength patterning or special hybrid integration approach is necessary. The presented device can thus be used as an extremely compact, cost-efficient device for high dynamic range sensing with capabilities to reach ppm accuracy.”