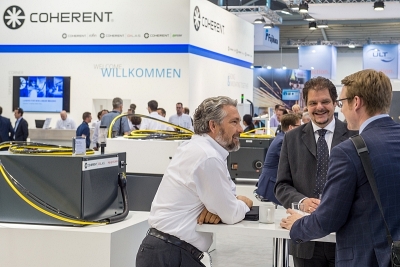 Lumentum has once again returned to the negotiating table with a revised offer to acquire Coherent.

The Silicon Valley photonics firm’s latest bid would see each Coherent share exchanged for $230 in cash and just over 0.67 shares in Lumentum - equivalent to a total slightly in excess of $7 billion at recent stock-market valuations.

The revised offer, which Lumentum says will remain open until the end of Wednesday March 24, represents an increase on last week’s cash-plus-stock pitch of $220 plus 0.91 Lumentum shares for each Coherent share, equivalent to $6.9 billion.

However, that offer was rapidly trumped by rival suitor II-VI. Now backed with up to $2 billion from private equity giant Bain Capital, II-VI raised the stakes to the $7 billion mark and the offer was quickly deemed “superior” by Coherent’s board of directors.

Silver Lake support
Responding to the latest Lumentum offer, Coherent said it would carefully review the proposal with its financial and legal advisors, who include Bank of America and Credit Suisse.

In its plan to fund the cash element of the envisaged transaction - estimated at $5.6 billion - Lumentum has recruited Silver Lake for $1 billion equity support, alongside $3.25 billion in the form of a new loan.

One key difference between the II-VI and Lumentum proposals is that the original merger agreement struck by Coherent and Lumentum back in January includes a termination fee of nearly $220 million payable by Coherent if it rejects the proposal.

That January agreement was based on a cash-plus-stock valuation of $5.7 billion - before a succession of rival bids from II-VI, MKS Instruments, and Lumentum pushed that total beyond $7 billion. MKS now appears to have dropped out of the race, while at the time of writing II-VI is yet to comment on the latest Lumentum bid.