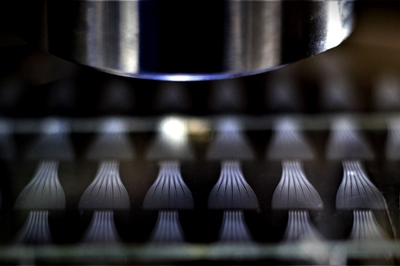 Optoscribe, the Scotland-headquartered developer of photonic integrated circuits (PICs) based on laser-machined glass, has signed a deal with Japanese conglomerate Sumitomo Electric Industries (SEI) that will see the two firms collaborate on multicore fiber components for optical communications.

SEI is one of the world’s largest manufacturers of optical fiber cable and related components, while Optoscribe was spun out of Heriot-Watt University near Edinburgh, UK, back in 2010.

The thinking behind the SEI deal is to “seed” the market to find practical use cases for SEI’s multicore fiber (MCF) interconnects, in particular its four-core (or greater) MCF with “fan-in/fan-out” components - aimed at datacom applications where ultra-high density optical interconnects are required.

Manufacturing ramp
Optoscribe, which has taken part in a series of technology development projects funded by the European Commission, closed a series B round of investment worth £2.8 million in September last year.

That additional cash was intended to support increased manufacturing capacity, and hiring of new engineers.

Specific applications include connecting singlemode and multicore optical fibers, or acting as an interface between optical fiber and arrays of VCSELs or PICs.

Optoscribe CEO Nick Psaila said of the new SEI agreement: “We are delighted to embark on this strategic cooperation with Sumitomo Electric. We see this as a great opportunity to jointly address the performance challenges faced by datacom and telecom applications, while creating and fostering the supply chain for further deployment of multicore fiber and related technologies.”

Tatsuo Saitoh, who heads up SEI’s optical communication laboratory, added in a statement from the two firms: “We believe that both companies, with cutting-edge technologies, can create a new market and ecosystem for multicore fiber-based interconnects. We are excited that our products will solve customers’ challenges for ultra-high density optical interconnects.”