The ORC’s Prof. Graham Reed reviews faster optical transmission, and an improved type of LiDAR, both based on SiPh. 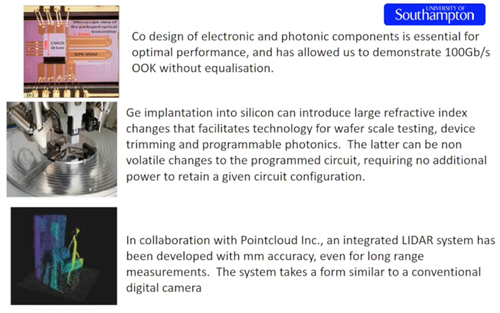 An update on the growing range of applications of silicon photonics was given on Tuesday at Photonics West Digital Forum by Graham Reed, Professor of Silicon Photonics at the University of Southampton, UK.

This technology, he said, is established as a game-changing technology for data communications, but it is also applicable to an increasing number of other applications. And even in data-comms, “the relentless demand for more data requires the performance of silicon photonics to continue to improve,” he said.

The presentation considered three aspects of silicon photonics: high-speed optical transmitters – meaning 100 gigabits per second from a single modulator; comprehensive wafer scale testing of SiPh circuits, and a non-volatile method of programming them without the need for large power consumption; and the ORC’s cooperation with San Francisco startup Pointcloud on 3D imaging via an integrated LiDAR system. The latter has demonstrated millimeter accuracy for measurements made at distances beyond 70m.

“Traditionally, electronic and photonic components have been designed separately,” Reed told the virtual conference. “We design the photonic chip over here, the electronic chip over there, and then we find some way of bringing them together, such as with wire bonding, flip-chip bonding or monolithic front end integration.

“But in recent years we have been proposing the co-design if you will of all of the components that form in this case a transmitter – so electronics, photonics and indeed the integration step that brings them together. We are now proposing a full integration simulation in order to try and achieve better performance than just designing the components separately.”

He went on to discuss various design models and assembly methods that his group has looked into, including re-arranging component positions and using wirebonding or flip-chipping to join separate elements, while trying to maximize performance and minimize footprint.

He then updated the audience on the ORC’s recent breakthrough in demonstrating the first all-silicon optical transmitter at 100Gbps and beyond without the use of digital signal processing.

This new design of optical modulator almost doubles the maximum data rate of current state-of-the-art devices, “demonstrating the potential for low power low-cost all-silicon solutions that avoid complicating fabrication processes with new materials that are not CMOS compatible,” he said.

“We have demonstrated the 100 gigabits per second on off-keying with no error correction. We have pushed out a little bit further but how far actually could this take us? Well we've just received some new funding to take this work further so watch this space.”

Considering another area of the ORC’s endeavors – automated wafer-scale testing – Reed said the aim of the ORC’s work in this respect is to produce a technology for wafer scale testing that could operate with standard wafer probers. He described the development approach in some detail then presented a video showing a new wafer prober in action. “Not only does this mean we can do electrical and optical testing separately but we can do complex electro-optical mixed signal testing,” he said. 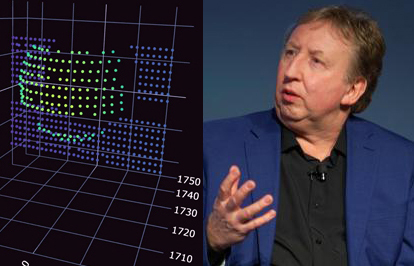 Reed then moved on to the third part of his presentation: 3D imaging via LiDAR. He said, “This is some work that we've done in collaboration with the startup company in San Francisco called Pointcloud. In 3D imaging systems a more diverse range of technologies is needed [compared with 2D imaging – such as in a standard digital camera].”

The partners have developed a new, integrated system, which uses silicon photonic components and CMOS electronic circuits in the same microchip. The prototype they have developed would be a low-cost solution and could pave the way to higher volume production of low-cost, compact and high-performance 3D imaging cameras for use in robotics, autonomous navigation systems, mapping of building sites to increase safety and in healthcare.

“LiDAR has been promising a lot but has not always delivered on its potential in recent years because, although experts have recognised that integrated versions can scale down costs, the necessary performance has not been there. Until now,” he said.

“The silicon photonics system we have developed provides much higher accuracy at distance compared to other chip-based LiDAR systems to date, and most mechanical versions, showing that the much sought-after integrated system for LiDAR is viable.”