Photoacoustic-ultrasonic system devised at the University of Buffalo able to visualize vascular features around tumors. 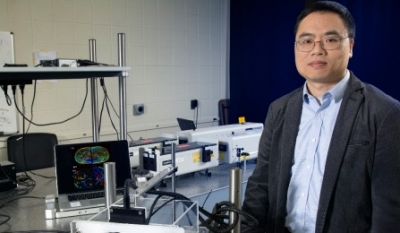 Researchers from the University at Buffalo say that their dual-scan mammoscope system, which combines photoacoustic and ultrasonic imaging, has a “high potential” for breast cancer imaging.

Presenting initial clinical results with the system during SPIE BiOS conference “Photons Plus Ultrasound”, part of the wider Photonics West event, Nikhila Nyayapathi said that the aim of the work was to verify whether the system could differentiate between malignant and healthy cases.

One particular focus is to find a better way to scan women with high-density breast tissue, something that presents problems for traditional X-ray mammography - and much lower diagnostic accuracy overall.

The Buffalo team imaged 38 patients with various types of tumor, and compared results from tumor-containing breasts with healthy breasts in each patient.

Nyayapathi said that breasts with tumors showed statistically significant differences to those without - for example exhibiting a higher average photoacoustic signal amplitude, and stronger variation in background signals.

The system was also able to visualize different vascular features in and around the tumor region for different sub-types of tumors.

Overcoming false positives
Breast cancer screening has long been seen as a suitable clinical application for photoacoustic imaging, partly because the limitations of existing mammography systems generate a large number of false positive results, and are unable to differentiate between slow-growing tumors and more aggressive forms of the disease.

Photoacoustics promises to overcome such limitations, because it is able to measure characteristics such as total hemoglobin concentration. Compared with normal tissue, higher levels of hemoglobin are associated with faster-growing types of tumor.

Other diagnostic features include oxygen saturation, blood vessel density, and the convergence of blood vessels towards the center of a tumor - all of which can be used to identify the presence of cancer.

However, photoacoustic imaging has its own limitations - notably in terms of depth penetration, motion artifacts caused by breathing, and the relatively slow scanning speed of some systems.

Nyayapathi showed details of the Buffalo system, which is based around a 10 nanosecond-pulsed Nd:YAG laser emitting at 1064 nm laser at a rate of 10 Hz.

It uses two water tanks that each contains a scanning head, and which also serve to mildly compress a patient’s breast while they are in a standing position. Each breast can be scanned in less than one minute.

Tumor sub-type identified
Testing the system on more than 70 patients recruited by the nearby Roswell Park Comprehensive Cancer Center and local medical screening firm Windsong Radiology, Nyayapathi and colleagues acquired both photoacoustic and ultrasonic images that were compared with X-ray, MRI, and biopsy data.

“We can see the [blood] vessels clearly in the periphery of the tumor,” Nyayapathi said of one particular patient scan, adding that the imagery was consistent with the specific sub-type of tumor known as “Luminal A”, which is regarded as a low-grade, slow-growing cancer with a good prognosis for patients.

Overall, the study showed that tumor-bearing breasts could be identified from a higher blood vessel signal - indicating the presence of larger-diameter vessels - and a higher contrast ratio, something thought to result from higher hemoglobin levels.

However, the researcher also pointed out that some of the patient results were excluded from final analysis, typically where breast size was small, or after difficulties coupling the breast tissue to the imaging system.

“At present, there is no reliable non-invasive imaging modality accepted as the routine method to assess response to neoadjuvant chemotherapy (NAC),” Lin reported. NAC is typically used to shrink the size of larger tumors prior to surgical removal.

“Data suggests that PACT is sufficiently sensitive to capture the angiographic [i.e. vascular] changes in breast cancer during treatment,” stated the researcher, suggesting that the results demonstrated the technique’s near-term potential as a diagnostic tool for assessing breast cancer response to systemic treatment.

“Further development of PACT may also enable serial imaging rather than the use of current invasive biopsies,” Lin added.