A study of 29 patients carried out by a research team in The Netherlands has provided further evidence that photoacoustic (PA) imaging has genuine clinical potential, and could be deployed as a screening tool for breast cancer in the future.

Srirang Manohar and colleagues from the University of Twente’s Biomedical Photonic Imaging group joined forces with the Center for Breast Care at the local Medisch Spectrum Twente clinic to test a laser-based system upgraded to provide a much larger field of view than earlier kit.

The non-invasive and painless technique, dubbed “PAMmography” by the researchers, works by firing nanosecond pulses of photons from a solid-state laser at tissue and detecting the ultrasonic signals produced when the target tissues absorb the laser light and are momentarily heated up. The slight increase in temperature of the absorbing molecules results in pressure waves that can be picked up by wideband ultrasound detectors.

Because hemoglobin and oxygenated hemoglobin absorb at the laser’s 1064 nm wavelength, the approach is able to indicate the presence of a high density of blood vessels – often indicative of cancer - without the need for a contrast agent.

The results of the latest clinical study, published July 10 in the open access journal Nature Scientific Reports, show for the first time that PA imaging can visualize the different shapes of tumors in the breast.

“We were able to identify lesions in suspect breasts at the expected locations in 28 of 29 cases,” wrote Manohar and colleagues, adding that the Twente Photoacoustic Mammoscope seemed able to recognize three different types of tumor, as defined by the standard magnetic resonance imaging (MRI) approach.

Potential advantages
Although PA imaging is still in the early stages of development, it does offer some potentially important advantages over conventional screening techniques like X-ray mammography, standard ultrasound, and MRI.

Aside from its reliance on ionizing radiation, one well-known problem with X-ray mammography – by far the main screening technique currently employed - is that it can “miss” certain types of tumors, particularly in dense breast tissue, while it often leads to unnecessary and invasive follow-up biopsies.

Conventional ultrasound is able to distinguish between solid masses and cysts, but produces a high rate of false positives and is also regarded as being operator-dependent. MRI is much more sensitive, but requires contrast agents to show up the blood vessels that supply a growing tumor, is often unable to distinguish between benign and malignant lesions, and relies on expensive equipment. As a result, invasive biopsies and histopathology provide the “gold standard” diagnostic test.

In contrast, PA imaging promises a painless, non-ionizing method of spotting the blood vessels that feed malignant tumors with relatively inexpensive kit, although Manohar warns against any premature optimism:

“Our method is relatively new, while MRIs and mammograms have undergone decades of development time,” said the researcher. “We still have lots of research to do to demonstrate the reliability of our technique. In an optimistic scenario, our method [could] be used in niche areas in approximately 5-10 years. But it could take longer before the method can be used regularly for screening and diagnosis.”

Key wavelengths
The latest study was carried out between April 2012 and May 2013, on 29 patients with “suspect and highly suspect” results from conventional imaging techniques. The Twente team’s upgraded PA system – based around a Continuum Q-switched Nd: YAG laser and a 588-element ultrasound detector array - was able to image a field of view of 90x85 mm in ten minutes, thanks to parallel acquisition of the ultrasound signals induced by the laser pulses.

For the first time PA images could be compared directly with those generated using MRI and in the histopathology lab. “The results give us new insights into PA lesion appearances, and the relationship between these appearances and tumor vascularity,” wrote the Twente team in its paper.

Results showed a correlation between three different categories of tumor, typically described as “mass-like”, “ring” and “non-mass or scattered”, although the team does admit that these were not always clear-cut.

“Overall this work shows that PA breast imaging has potential in visualization of cancer,” they concluded. “For the first time, we observe patterns in PA image intensities which while not being completely clear-cut in categorization, can be described as mass-like, non-mass and ring appearances.”

New system to acquire multiple projections
They would like to perform a larger trial to further study how malignant tumors appear in PA imaging, and although there is no follow-up at present, Manohar told optics.org that team is now working on a new variant of the imager, called "PAM 2".

He added: "This system uses photoacoustics in a computed tomography geometry, where we will be able to acquire multiple projections around the breast, from which we can construct the image. At this juncture, the priority is to get the new instrument ready to perform first patient work by the end of the year." 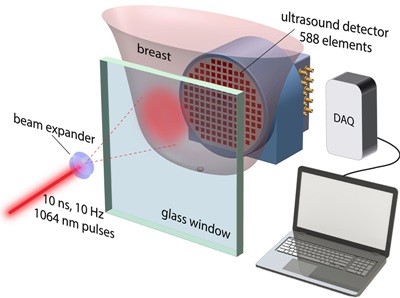 This latest system also features a 755 nm laser source, an addition that should reveal more about the nature of the tumors imaged because of the different absorption coefficients of hemoglobin and oxygenated hemoglobin at the 755 nm and 1064 nm wavelengths.

The team has also set up a company, “PA Imaging”, to advance the technology further. The latest progress comes shortly after a US team carried out a small-scale trial at the University of Florida that suggested the optical technique was able to track the effects of chemotherapy on breast tumors, while cervical and skin cancer diagnostics are seen as other promising applications.