Highly scalable alternative to MRI and X-ray scans is starting to migrate out of the laboratory, says one of its leading exponents. 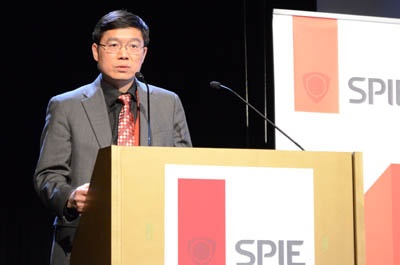 Photoacoustic imaging is starting to be used on human patients, and the technology could revolutionize medical imaging in clinical practice – from early-stage cancer detection, to neurology and label-free histology.

That was the message from the Washington University in St Louis scientist and photoacoustic imaging pioneer Lihong Wang, in a keynote presentation at last week’s SPIE Photonics Europe conference in Brussels, Belgium.

Speaking to a packed auditorium as part of the event’s “hot topics” forum, Wang described recent developments, including early in vivo experiments on human patients, where photoacoustic imaging has been used to detect breast tumors and melanoma – the most dangerous form of skin cancer.

The technology is seen as a future alternative to conventional scanning methods such as magnetic resonance imaging (MRI) and X-ray computed tomography, commonly known as a “CT” scan.

Among the advantages of photoacoustic tomography (PAT) are that it is non-ionizing, does not require biomarkers, and could potentially deliver real-time scans with extremely high resolution, showing small structures that conventional scanners would miss. The main drawback with the approach, as with many optical techniques, is a limited imaging depth - but that is steadily being overcome, with up to 7 cm now possible.

According to Wang, the key aspect of PAT is its inherent scalability, from imaging of individual cells all the way up to entire organs and, for small animals, entire bodies. That is not usually possible because of the typically very different contrast mechanisms at work in microscopic and macroscopic imaging. But because PAT images with the same contrast at all scales, he says that it can be used for both.

Light makes sound
First described by Alexander Graham Bell (in the form of the telephone inventor’s “photophone”) more than a century ago, the technique relates to the interaction of sound and light and is based on a simple set of principles.

When a light source – these days typically a Q-switched, nanosecond laser pulse - is fired at an absorbing target, the target is heated up and expands. That thermal expansion generates an acoustic signal, which can be detected in the form of ultrasound - and then reconstructed to generate an image showing the distribution of optical absorption inside the target.

Wang uses the analogy of three people in different places hearing a clap of thunder – the sound will have originated at a single point, and by triangulation that point can be calculated. In PAT, by detecting the laser-generated ultrasonic signal from hundreds of positions and in multiple dimensions, an image of the structure of the target, for example human tissue, can be created.

And because biological tissues scatter ultrasound waves far less than they do photons in the visible range (fully three orders of magnitude less), those reconstructed images can show detail at a high resolution.

In addition, the wavelength of the laser used can be tailored to probe for specific molecules, and because the intensity of the ultrasonic signal relates directly to the level of light absorption, non-absorbing molecules produce no signal and effectively make the images free of background noise.

Wang’s team at Washington University’s Optical Imaging Laboratory is at the forefront of developments, and now has a 512-element ultrasound array that can reconstruct images with state-of-the-art precision. In Brussels, the scientist showed one remarkable video sequence of a whole-body PAT scan of a mouse, complete with an in-plane resolution of 100 µm.

Clinical migration
Wang pointed out that, while optical techniques such as microscopy have historically been used in medicine to image small structures, and non-optical techniques like X-rays and conventional ultrasound for large structures such as entire organs, PAT “bridges that gap”, thanks to its scalability. And having already become a fast-growing field of research, now photoacoustics is starting to migrate from the microscopy laboratory to the “macroscopic” clinical practice.

Initial clinical applications are expected to range from neonatal brain imaging and prostate cancer detection to monitoring of blood oxygenation. There are plenty of examples to back up that confidence. These include the development of a hand-held photoacoustic probe in conjunction with Philips Research, while US-based Endra – for whom Wang chairs a scientific advisory board – sells a pre-clinical PAT instrument for small-animal imaging. Visualsonics is another commercial developer, with its "Vevo LAZR" platform.

Screening for breast cancer is seen as another early clinical application. Using a 650 nm laser with an energy density of 10 mJ/cm2 (half the level of what Wang describes as a conservative American National Standards Institute (ANSI) safety limit), PA imaging has now been shown to detect human breast cancer tumors in vivo, and could radically improve screening for a disease affecting millions globally.

That’s because one of the problems with current breast cancer screening is that it leads to a large number of surgeries to remove tumors. Not only are 90% of those surgeries unnecessary, but the invasive nature of the operation leads to a 5% complication rate. Using PAT to provide more specific screening could drastically cut both surgeries and complications.

Other developments include a confocal photoacoustic microscope, which has been used to produce images of melanoma skin cancer in humans, and in combination with gold nanoparticles and nanocages to look for specific hormone receptors that indicate the early onset of the disease.

But perhaps the most impressive aspect of this technology is the sheer range of applications that Wang foresees. He says that PAT and its variants can provide not just anatomical, but functional, metabolic, molecular and genetic information – recent examples range from mapping oxygen saturation, marker-free metabolic rate (known to be a key early indicator of cancer development), and label-free in vivo histology.

In unpublished work, photoacoustic microscopy has shown directly the release of oxygen by individual red blood cells – a development that ought to give a unique insight into microcirculation, thought to be another key element of early-stage cancer development.

Revolution in clinical imaging?
In a review article published by the leading academic journal Science last month, Wang emphasized how the new technique could push the limitations of current health screening methods: “Up-scaling metabolic PAT from small animals to humans is expected to revolutionize the screening, diagnosis and treatment of metabolic diseases, particularly cancers and cerebral disorders,” he wrote.

Downscaling metabolic PAT to the scale of the cell offers up yet more opportunities: “Because hypermetabolism is a quintessential hallmark of cancer, metabolic PAT may enable in vivo screening at the earliest stage, without using exogenous [i.e. external] contrast agents.”

There are still plenty of challenges, of course. In Brussels, Wang highlighted the problems that are caused by bones, particularly large, thick bones such as the human skull, which distort the acoustic signal. There is also a need to image more deeply, and deal better with scattering caused by air cavities in the body.

Wang highlighted how developments in photonics could help push PAT into more clinical applications. For deep-penetrating PAT that is truly analogous to the conventional CT-scan, he says that high-energy lasers with video-rate pulse repetition are needed, while for faster microscopy or endoscopy applications, a high-repetition-rate laser with rapid wavelength tuning at each scan position will be required.

That’s for the longer-term future. But with the first pre-clinical PAT systems now commercialized, the more immediate challenge will be to ensure that clinical systems make their way through the tough regulatory approval steps inherent to any fundamentally new healthcare technology.

If and when that has been achieved, PAT and its variants could revolutionize imaging – both for fundamental life science studies and clinical patient care.