IPG targets ‘tens of thousands of customers’ with hand-held welders

Sales back on the rise at the fiber laser specialist, with new ultra-compact designs expected to improve profit margins. 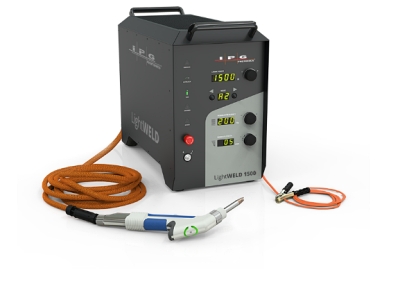 IPG Photonics has reported sales of $337 million for the closing quarter of 2020 - the first time in two years that the fiber laser firm’s revenues have shown year-on-year growth.

Hit by the successive impact of a US-China trade war, a sharp slowdown in the automotive sector, and then the coronavirus pandemic, IPG’s sales have been on the wane since hitting record highs in 2018.

But the $337 million figure was up 10 per cent on the closing quarter of 2019, while net income of $49 million showed a marked improvement from the loss of $4.5 million posted by the company a year ago.

With business in all geographies except Japan now indicating solid growth, and a raft of new products and applications expected to further increase the firm’s diversification beyond laser cutting and welding, IPG’s management team sounded an optimistic note despite the ongoing effects of the pandemic.

“Despite numerous challenges in 2020 from Covid-19, we ended the year with a strong performance and are very well positioned as we enter 2021,” observed CEO Valentin Gapontsev, pointing to renewed customer investments in equipment upgrades and automation, and a strong increase in so-called “frame agreement” bookings activity in China in the opening few weeks of the year.

“While considerable macroeconomic uncertainty related to the pandemic remains, we are incrementally more optimistic in our outlook given the near-term trends we have seen in the last quarter,” he added.

Hand-held laser welding
Part of the reason for that optimism appears to be an encouraging reaction to a new range of hand-held laser systems recently launched by the company.

“The initial customer response has been extremely positive,” Gapontsev told an investor call discussing the latest results. “We believe this system has great potential for IPG as it replaces traditional hand-held welding products used in metal fabrication like MIG and TIG [i.e. metal arc and tungsten arc welding systems].”

“We have already sold a number of units in the last few weeks, and believe that there are thousands of customers in the US alone, and many tens of thousands worldwide that could be interested in this unique product.”

As well as being compact and cheap, the systems are said to be very simple to use - meaning that metalworkers could be trained to use them much more quickly than is possible with traditional welding techniques.

“Only a few hours of training is required,” stated Gapontsev. “It is an enormous benefit [for welders].”

Happily for IPG, it appears that the lower pricing point for these and a series of other ultra-compact lasers launched recently will not reduce the company’s profit margins.

Company CFO Tim Mammen added that the new designs did not represent any trade off in terms of quality or reliability. “[It’s a] more compact electromechanical design, but the optics are the same,” he said.

“We are continuing development of our new generation of analog and coherent digital silicon photonic devices for super-high-speed and highest-volume data processing for telecom, datacom, and many other advanced future applications,” noted the CEO.

Highlighting the firm’s continued investment in research and development activity - more than 650 employees work in this area for IPG - Gapontsev and Mammen explained how, compared with other laser firms, this effort was highly focused on a narrow range of product types.

“IPG’s fiber laser technology is unique in many ways, and [we are] vertically integrated,” said Mammen. “[So] we get a significantly higher rate of return on our internal research and development.”

Invited to respond to the sudden bidding war to acquire laser giant Coherent and the effect it might have on the industry, the CFO did not comment directly, but said that none of the parties involved really had the same core strengths as IPG - largely a result of that focus on fiber lasers - and so any impact on IPG would be minimal.

Although IPG does make targeted acquisitions specific to its existing technology portfolio, it does not consider itself to be an industry consolidator in the same way - and would appear unlikely to get involved in any similar moves.

• Looking to the future, IPG’s executives said that they expected sales in the opening quarter of 2021 to end up somewhere between $310 million and $340 million. Although down on the just-reported quarter, such a seasonal decline is typical for a period that includes the lunar new year in China.

Following the latest results announcement, IPG’s stock price remained close to the record-high valuations reached in recent weeks. At around $256 in early trading on February 16th, the company’s market capitalization stood at $13.4 billion.