Fiber laser company is aiming to release a variety of potentially disruptive products within the next year. 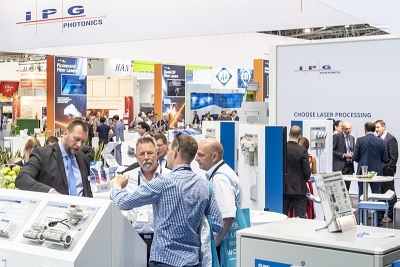 IPG Photonics, one of the world’s top providers of industrial lasers, says that it is preparing to launch several new products “with significant disruptive potential” over the coming months, including a hand-held laser welder.

The Oxford, Massachusetts, company revealed brief details of the plan alongside its latest quarterly financial results. Those results were better than the company had projected back in August, with a strong upturn in orders from China witnessed in September and record bookings from customers in North America.

However, CEO Valentin Gapontsev and his executive team also warned of the uncertainties presented by the resurgence of the coronavirus pandemic across Europe and North America in recent weeks.

Systems business write-down
At $318 million, sales revenues in the quarter ending September 30 were up from $296 million in the June quarter, but down on the $329 million total posted a year ago.

On the bottom line IPG’s earnings in the latest quarter were hit by an accounting write-down of $45 million related to IPG’s Genesis systems business, which has been hit by the impact of the pandemic on aerospace and transportation markets in particular.

However, cost-reduction activities initiated in late 2019 mean that the firm’s underlying profitability has in fact improved year-on-year despite coronavirus.

Gapontsev told investors that the better-than-expected sales result was driven by two key factors - a strong rebound in the key market of China, and activity in Europe bouncing back from the exceptionally weak June quarter.

“Despite the impact of Covid-19 pandemic, sales of green, ultraviolet, and ultrafast pulsed lasers into emerging micro processing applications showed strong growth year-over-year,” said the CEO, pointing to widespread use of the green lasers in solar cell production.

New launches trailed
Gapontsev and IPG pride themselves on laser innovation, and raised expectations for a slew of new products to be released over the coming year.

“We are investing in a number of next-generation solutions with significant disruptive potential that we plan to launch over the next six to twelve months,” said the CEO, pointing to positive customer evaluation of the company’s new hand-held laser welder.

“The multichannel QCW [quasi-continuous-wave] lasers for high-speed spot welding applications have the potential to be disruptive in displacing very inefficient Nd:YAG lasers,” added Gapontsev. “This is due to the significant cost savings they can bring due to an increase in welding productivity and decrease in electrical consumption.”

The CEO also has high hopes for kilowatt-scale pulsed lasers in ablation and cleaning applications, new sources for soft-tissue medical treatment, and mid-infrared lasers in high-resolution spectroscopy, biomedicine, and even high-speed communications.

Stop-start Japan
Although the impact of the pandemic was far more muted overall in the September quarter, IPG’s COO Eugene Scherbakov noted that sales in Japan were down more than 40 per cent compared with last year - despite the relatively low incidence of Covid-19 in the country.

“While infections in the region are below other countries, the recurring stop and re-start of economic activity has delayed many significant projects within our welding and cutting businesses in Japan,” Scherbakov explained.

For the closing quarter of the year, the IPG team is anticipating sales of between $290 million and $320 million. If accurate, that forecast would see the company post annual revenues in the region of $1.17 billion.

That would be down on last year’s total of $1.31 billion, which itself represented the first decline in IPG’s annual sales figure for a decade, prompted by US-China trade tensions and a slowdown in the automotive sector.