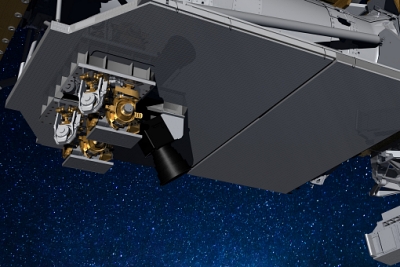 NASA has launched a new laser relay satellite that will use optical links to send data to ground stations on Earth.

Having blasted off from Cape Canaveral early on December 7, the rocket's upper stage then carried the payload to its geosynchronous orbit. Once deployed, the optical communications module will be able to support other satellites flying in low-Earth orbits.

According to a NASA fact sheet describing the Laser Communications Relay Demonstration (LCRD) mission, the relay’s first user will be the integrated laser communications module on board the International Space Station (ISS).

Once the two are connected, the ISS module will send data to LCRD at rates of 1.2 Gb/s over the laser link. The LRCD will then relay that data to two high-altitude ground stations - one in California and another in Hawaii.

Adaptive optics
Because of the much higher bandwidth of optical links compared with conventional microwave communications, data-intensive information such as high-resolution imagery will be transmitted back to Earth much more quickly.

However, clouds pose a serious problem for lasers operating at typical communications wavelengths - and NASA has selected the California and Hawaii ground stations because they are known to be relatively cloud-free locations.

Both of the ground stations will also deploy adaptive optics systems to help counteract the effects of atmospheric turbulence, which will degrade the laser signal even in clear skies.

“Until its first user is launched, LCRD will practice sending test data to and from its ground stations,” says NASA. “This test data will be sent up through radio frequency signals from the mission operations center and then the LCRD spacecraft will reply over optical signals.”

Initially, that will include spacecraft health data; tracking, telemetry, and command data; and sample user data to ensure LCRD is operating as expected. Once checked, the ISS and other LEO satellites will send their data to Earth via the LCRD satellite relay.

Among the expeditions that could use laser communications are NASA’s planned missions to the Moon and Mars, says the administration. 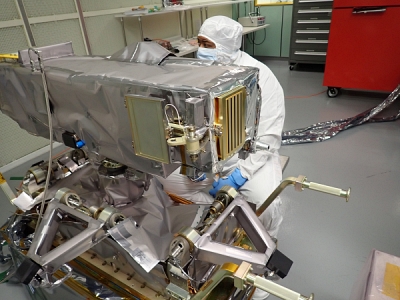 • Hitching a ride on board the same launch vehicle used by the LCRD mission was another optics-related payload, the Ultraviolet Spectro-Coronagraph (UVSC) Pathfinder.

The experimental mission will investigate a new way to observe and forecast potentially disruptive space weather caused by solar particle storms, which are able to damage both spacecraft electronics and cell DNA.

Typically, explains NASA, there are about 20 such disruptive solar particle storms during a normal 11-year solar cycle. However, scientists aren’t currently able to predict which of these storms will produce damaging solar energetic particles (SEPs), or how intense each SEP event might be.

Leonard Strachan, the UVSC mission’s principal investigator and an astrophysicist at the US Naval Research Laboratory, said ahead of the launch: “It’s a pathfinder because we’re demonstrating new technology and a new way to forecast this type of space weather. Right now, there’s no real way of predicting when these particle storms will happen.”

Unlike most coronagraphs, which take images in the visible spectrum, NASA says that the new instrument is combined with an ultraviolet spectrometer that it is hoped will be able identify when seed particles are present by analyzing light in the corona at the Lyman alpha wavelength, 122 nm.