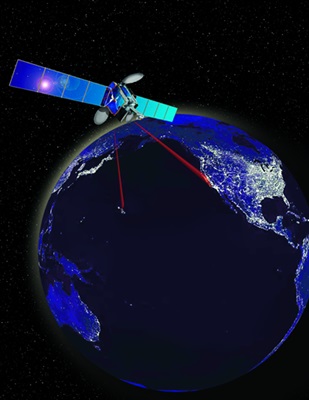 Rochester, New York, company ITT Space Systems has been selected to build an optical assembly that will be used by NASA to validate high-speed laser transmission of data from Earth orbit and deep space.

Described by NASA as its first "long-duration" optical communications mission, the Laser Communications Relay Demonstration (LCRD) project is scheduled to fly for two years as a commercial satellite payload following ground validation testing and a 2017 launch.

Under the $6.2 million contract, ITT will build two optical assemblies over 15 months. They will then be integrated into modules that will transmit and receive data through free space.

“The purpose of the LCRD project is to demonstrate optical communications relay services between geosynchronous orbit and Earth over an extended period, and gain knowledge and experience that will enable NASA to design, procure and operate cost-effective future optical communications systems and relay networks,” announced the administration.

NASA also announced that the digital processor assembly for the LCRD project would be provided by Colorado-based SEAKR Engineering, under a $6.5 million, 21-month contract.

It is hoped that LCRD will pave the way for a revolution in the way that data and video is transmitted between space and Earth. Those requirements are still met with radio-frequency links today, but moving to the optical regime would – as has been demonstrated in terrestrial communications – increase the available bandwidth dramatically.

As well as increasing data transmission rates by orders of magnitude, a switch to free-space lasers would also help to reduce payload weight – a key factor in the cost of any launch.

The weather on Mars
And while NASA and the European Space Agency (ESA) are already testing laser links as part of the Lunar Atmosphere and Dust Environment Explorer (LADEE) mission that was launched in September 2013, it is hoped that free-space optics will soon support much more distant activities.

“Laser communication will make it possible to establish a virtual presence on remote planets and other objects in the solar system,” says the administration in its LCRD mission factsheet.

“Such a leap in technology could deliver video and high-resolution measurements from spacecraft over planets across the solar system,” says NASA, adding that this would allow researchers to study the “weather” on other planets in much the same way that hurricanes are currently tracked on Earth.

Error-free lunar laser link
Last December, NASA said that the LLCD setup had demonstrated error-free communications during broad daylight, including operating when the Moon was to within three degrees of the sun as seen from Earth.

And the system was shown to work just as effectively when the Moon was low on the horizon (less than 4 degrees) as seen from the ground station - indicating that wind and atmospheric turbulence did not have any significant negative impact. "LLCD was even able to communicate through thin clouds, an unexpected bonus," NASA said.

For LCRD, the near-infrared laser links will be tested from ground stations in California and New Mexico, which will beam data to and from the satellite as the specifics of the transmission process are refined and different operational scenarios are studied and perfected.

That work will include more studies on the impact of clouds and other potentially disruptive influences, which have proved problematic in the past in deployments of free-space lasers for terrestrial communications.

“In a two-year spaceflight operational environment, LCRD will demonstrate that optical communications can meet NASA’s and other agencies’ growing need for higher data rates using lower power and smaller communications systems on board future spacecraft.”

• NASA has scheduled a media teleconference for 2pm EDT on Thursday, April 3, to discuss the extended mission operations, additional science gathering, and planned impact in April of the LADEE mission.