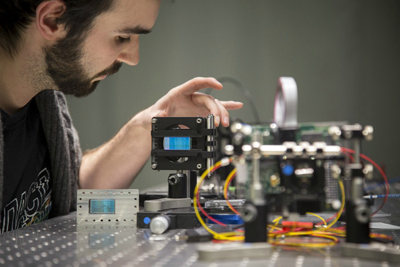 Research at the QT Hub in Sensing & Timing, Birmingham.

The hubs are based in Birmingham, Glasgow, Oxford, and York. In each case, photonics technologies are instrumental to the developments.

Examples of some of the developments already taking place include: technologies that will allow fire crews to see through smoke and dust; computers to solve previously unsolvable computational problems; construction projects to image unmapped voids like old mine workings; and cameras that will let vehicles see around corners.

The new phase of investment was announced by Science Minister Chris Skidmore, during a visit this month to the University of Sussex, which partners with the Quantum Computing & Simulation Hub and the Quantum Technology Hub in Sensing and Timing, and will build on the earlier investments that set up the Hubs in 2014.

Skidmore commented, “Our world-leading universities are pioneering ways to apply quantum technologies that could have serious commercial benefits for UK businesses. That’s why I am delighted to be announcing further investment in Quantum Technology Hubs to bring academics and innovators together and make this once futuristic technology applicable to our everyday lives.”

This is a collaboration between seven universities, National Physical Laboratory (NPL), British Geological Survey (BGS) and industry. It brings disruptive new capability to real world applications with high economic and societal impact to the UK. This Hub’s prospectus states, “the unique properties of Quantum Technology sensors will enable radical innovations in geophysics, healthcare, timing applications and navigation. The total long term economic impact could amount to as much as 10% of GDP.

The output from a sensor is of little value without the ability to translate raw data into actionable information: data analysis and AI skills are needed here. The research activities of the hub are designed to connect and develop all these skills in a coordinated fashion so the impact on the UK economy can be accelerated.

This Hub is working to enable the UK to lead in Quantum Computing and Simulation. Its mission is to “drive progress toward practical quantum computers and usher in the era where they will have revolutionary impact on real-world challenges in a range of multidisciplinary themes including; discovery of novel drugs and new materials, through to quantum-enhanced machine learning, information security and carbon reduction through optimised resource usage.”

Research is focused on the hardware and software that will be needed for future quantum computers and simulators. In hardware, the Hub is developing a range of different platforms, encompassing simulation, near term quantum computers, and longer term fully scalable machines.

The aim of the Quantum Communications Hub is to pursue quantum communications at all distance scales, to offer a range of applications and services and the potential for integration with existing infrastructure. The Hub is working to engineer such "many-to-one" technologies to enhance practicality and real-world operation. Longer distance conventional communications - at city, metropolitan and inter-city scales - already use optical fibres, and quantum communications have to leverage and complement this.

The Hub has already established the UK's first quantum network, the UKQN. They will be extending and enhancing the UKQN, adding function and capability, and introducing new Quantum Key Distribution (QKD) technologies - using quantum light analogous to that used in conventional communications, or using entanglement working towards even longer distance fibre communications.

QuantIC brings together the Universities of Southampton, Bristol, Edinburgh, Exeter, Heriot-Watt, Imperial College, Strathclyde and Glasgow with industrial partners from across the UK.

QuantIC will continue to develop what it calls “revolutionary” imaging systems that shift the way imaging occurs, such as the ability to see directly inside the human body, the ability to see through fog and smoke, to make microscopes with higher resolution and lower noise than classical physics allows, and quantum radars that cannot be jammed or confused by other radars around them.

These developments will be enabled by new technologies, such as single-photon cameras, detectors based on new materials and single-photon sensitivity in the mid-infrared spectral regions.

The new £28 M funding for the second phase of QuantIC’s operations is part of £94 M, announced above. Across this consortium, the hub's major research successes to date include the development of QuantiCAM, a digital camera which captures photons 10,000 times faster than conventional cameras, and cameras capable of novel imaging feats including looking around corners and seeing clearly through smoke.

A portable gravity imager capable of measuring; earth tides; subtle changes in the earth around us has also attracted significant industrial interest for use in space, civil engineering and environmental monitoring. The University of Southampton plays an important role in the fabrication of devices and materials, lasers and routes to miniaturise, with research centred around the cleanrooms and Optics labs.

QuantIC has also incubated three spinout companies so far: QLM, which has developed a drone mounted quantum sensing solution capable of remotely detecting and quantifying minute methane leaks; Raycal, which provides consulting services in the area of quantum technologies, with a special focus on imaging and metrology; and Sequestim, which aims to commercialise the next generation of terahertz imaging technology for security screening applications.

University of Southampton's, Professor Peter Smith (Optical Engineering and Quantum Photonics Group, Optoelectronics Research Centre), commented, "The University of Southampton has been involved with the QT hubs for some time and this funding will give us an excellent boost to our research. We are heavily involved with funding from the Industrial Strategy Challenge Fund, and with DSTL activity within Quantum Tech - and contributing to projects ranging from satellite applications through to quantum computing.”