New platform enlarges field of view for improved imaging of neurons and their neighbors. 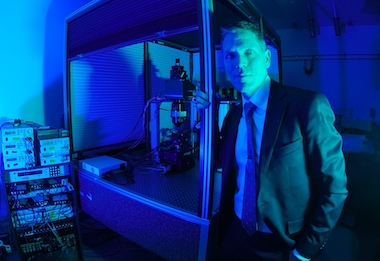 The impact of two-photon microscopy on functional imaging of neuron activity was recognized when the technique's pioneers were awarded the €1 million Brain Prize in 2015, but certain practical challenges to implementing the technique have remained.

Recent studies applying adaptive optics to two-photon methods and optimizing imaging depths have aimed to tackle specific aspects of the two-photon principle which are less than ideal for clinical use.

A project at the University of California, Santa Barbara (UCSB) has now demonstrated a new beneficial modification, aimed at enlarging the field of view (FOV) achievable from two-photon imaging.

Published in Nature Communications, the platform has been christened Dual Independent Enhanced Scan Engines for Large field-of-view Two-Photon imaging (Diesel2p), and could be valuable as a means to improve calcium imaging of neurons in the living brain. The platform has also been made available as open-source technology by UCSB.

"The events that we're interested in imaging last less than a second, so we don't have time to move the microscope. We have to get everything in one shot, while still making sure that the optics can focus ultrafast pulses of laser light."

During in vivo trials on mice brains the Diesel2p platform achieved a field of view reaching 25 square millimeters, the largest field of view of any such instrument according to the UCSB team.

New insights from the brain

The platform's architecture employs two independent scan engines, each with its own beam-directing components, to access two areas simultaneously rather than have one beam jumping back and forth between two areas sequentially, according to UCSB's published paper. The two pathways are each equipped with a deformable adaptive-optics mirror, for rapidly adjusting the focal plane axially and correcting optical aberrations, and both can access the same large imaging volume.

"Each arm of the scan engine can arbitrarily position the imaging location within the full FOV, and scan with parameters that are completely independent from the other arm," noted the project. UCSB indicated that previous iterations of the instrument had involved the two lasers being yoked and configured to the same parameters, an arrangement that strongly constrains sampling.

The new instrument allows for different scan parameters to be used for both beams, and its architecture, which incorporates several customized optical elements, is already being broadly adopted for its ability to provide high-speed imaging of neural activity in widely scattered brain regions. In addition to the new levels of performance, details of the platform have been made open-source so that other researchers can develop the principles further, as a group at Boston University has already done.

Enhancing the ability to carry out flexible subcellular-resolution imaging of neural behavior is part of the drive towards improved methods to study live animals that could ultimately have real-world benefits, according to Smith, for example in deep learning platforms.

"The systems we use for deep learning are based on insights from the brain, but they are only a few insights, and not the whole story," Smith commented. "There are interesting computational principles that we cannot yet replicate in human-made machines that exist in the brains of mice, and I want to start to uncover that. It's why I wanted to build this microscope."