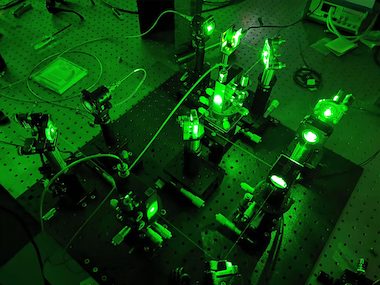 "Thus technology will usher in a new wave of imaging capabilities," said Northwestern's Florian Willomitzer. "Our current sensor prototypes use visible or infrared light but the principle is universal and could be extended to other wavelengths, applied to radio waves for space exploration or underwater acoustic imaging."

Multiple approaches to NLoS imaging currently exist, driven by the advantages of being able to image accurately through scattering media such as biological tissue, or in adverse environmental conditions.

The Northwestern project was driven specifically by the goal of imaging around corners, to view objects not directly accessible by line-of-sight techniques at all. Existing approaches to this problem include exploiting the finite speed of light in time-of-flight techniques, or detecting spatial correlations in scattered light for memory effect-based analysis.

However, the wide disparity in field-of-view and resolution of current NLoS schemes greatly limits their utility, according to the project team. The new approach exploits spectral correlations in scattered light to recover a high-resolution holographic representation of the obscured scene, over a wide angular field.

In particular SWH exploits the way that coherent light at two closely spaced wavelengths traversing near-identical paths in a scattering medium can preserve phase information at scales relating to a lower frequency "synthetic" wavelength that is not subject to scatter. Choose the wavelengths carefully and the synthetic phase can be used to compute a holographic representation of an obscured object.

"Our SWH approach draws inspiration from multi-wavelength interferometry on rough surfaces," noted the project in its published paper. "We exploit spectral correlations in scattered light at two optical wavelengths to assemble a hologram of the obscured objects, a combination of capabilities that is unmatched by competing NLoS approaches."

The technique could be the first method for imaging around corners and through scattering media that combines high spatial resolution, high temporal resolution, a small probing area and a large angular field of view, according to Northwestern. This means that the camera can image tiny features in tightly confined spaces as well as hidden objects in large areas with high resolution, even when the objects are moving.

"If you can capture the entire light field of an object in a hologram, then you can reconstruct the object's three-dimensional shape in its entirety," commented Willomitzer. "We do this holographic imaging around a corner or through scatterers, with synthetic waves instead of normal light waves."

In trials using an initial small probing area of 58 x 58 millimeters, SWH was able to recover a high-resolution holographic representation of obscured objects over a short time interval within a nearly hemi-spherical angular field-of-view.

The technique should be robust enough to accommodate different NLoS imaging scales and scattering geometries, perhaps assisting endoscopes in medical imaging; the team envisages using it to see around the many folds inside the intestines, currently a challenge for endoscopic cameras. Other applications could ultimately include driver assistance systems, since the principle should hold for uses in nighttime or foggy outdoor environments.

"It's still a long way to go before we see these kinds of imagers built in cars or approved for medical applications," Willomitzer said. "Maybe 10 years or even more. But it will come."