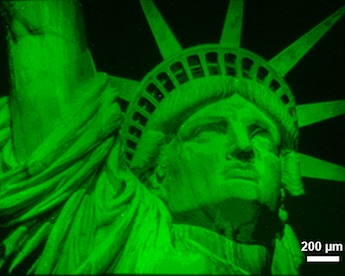 A team from CUNY and Northwestern University has developed a 4D-printer capable of creating precisely designed nanopatterned surfaces, as a potential route to modelling the complexity of cell surfaces decorated with organic or biological molecules.

The technique, involving a combination of organic chemistry, surface science, and nanolithography, could have a variety of uses in drug research and biosensor development. The work was published in Nature Communications.

Significantly, the new technology can create surfaces combining different materials, and these materials can be patterned across the surface without the use of expensive photomasks or tedious clean room processes, according to the project team.

The method has been christened Polymer Brush Hypersurface Photolithography, and produces polymeric pixels by combining a digital micromirror device (DMD), an air-free reaction chamber, and microfluidics, so as to independently control both monomer composition and the polymer height of each pixel during the lithography operation.

The project has borrowed the term "hypersurface" from mathematics, and chose it to indicate a pattern where more than three properties of each pixel - in this case x and y position, height, and chemical composition - can be controlled independently.

"Researchers have been working toward using lithographic techniques to pattern surfaces with biomolecules, but to date we haven't developed a system sophisticated enough to construct something as complicated as a cell surface," commented Daniel Valles of CUNY. "We envision using this system to assemble synthetic cells that allow researchers to replicate and understand the interactions that occur on living cells, which will lead to the rapid development of medicines and other bioinspired technologies."

Interactions between cells and polymers

Polymer brushes - arrangements of polymer chains that are attached by one end to a substrate - have been used in surface engineering for some time, but one major challenge tackled by the CUNY project was the creation of gradients where brush density or brush height is varied across the surface through fine control of the DMD.

Another hurdle was the ability to simultaneously control both the height and monomer composition at each pixel, by sequentially introducing three differently colored fluorescent monomer solutions into the reaction cell. Hypersurfaces manufactured this way could potentially feature thousands of different polymer brushes in an array, according to CUNY.

As proof-of-concept, and an example of tackling both these challenges together, the researchers created an image of the face of the Statue of Liberty from methacrylate polymers, built from printed polymer brush patterns using precise doses of light to control the polymer height of each pixel. Coordination between the microfluidics and the light source control the chemical composition at each location.

"The integration of microfluidics and an air-free reaction chamber with the DMD is the key innovation that allows the spatiotemporally controlled grafting of different materials onto the substrate, and could, in principle, be used to make polymer patterns composed of a practically unlimited number of unique brush compositions," said the team in its paper.

The researchers now plan to continue development of the printing platform to increase system speed, reduce pixel dimensions, and develop new chemistries for increasing the scope of materials that can be patterned. They are currently using the patterns created by this platform to understand the subtle interactions that dictate recognition in biological systems.

"We have created a new tool for performing organic chemistry on surfaces, and its usage and application are only limited by the imagination of the user and their knowledge of organic chemistry," commented Adam Braunschweig of CUNY.