Dayton researchers say sensor filter can reduce the number of cameras and sensors needed in smart phones, cameras, and cars. 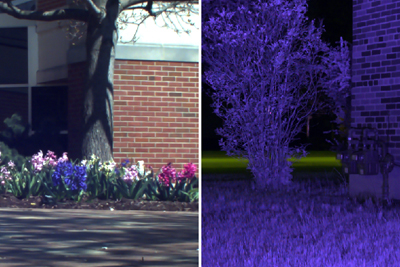 Night and day functionality: beneath the moon and under the sun.

Cell phones, cars and many other devices often have separate cameras and sensors for day and night vision, but that could change following a development by researchers at the University of Dayton (UD), Ohio, US, who have developed a single optical device that can switch between day and night vision applications.

Sarangan and Hirakawa see a valuable practical application in reducing the number of cameras and sensors in smart phones and cars, which could reduce cost and increase night safety, for example.

In the optical filter Heenkenda developed, a novel phase change material switches the camera between day and night operation. This optical filter can be switched on and off using tiny heat pulses, according to Sarangan. The same type of materials are also used to store data in some computer chips.

“At night, we want the camera to function better by processing near infrared light. During the day, near infrared radiation makes colors funky, so we want to block it from the camera,” said Hirakawa.

“So we need to filter out near infrared only during the day. Our switchable filter uses phase changes to block or pass near infrared light to the camera.” Optimization, he added, would be automated switching based on the filter recognizing night by clock or the amount of light.

“Cars are going to be sensors on wheels. It’s headed that way,” added Hirakawa said. “If you can recycle technology to do two things, and you can save 5 or 10 cents per 100 million parts, you can save $10 million altogether. If you can cut costs and redundancies in your camera or your devices, then it can potentially be very helpful. In automotive applications, this will be something in all cars, not just luxury cars, because the savings makes it accessible for everyone.”

As a doctoral student working with Sarangan, Heenkenda also presented at the Institute of Electrical and Electronics Engineers Photonics conference in 2021. She said she is thankful for the opportunities she gets as a student at UD, she said.

“There are only a handful of electro-optics and photonics graduate programs in the country and University of Dayton is one of them with access to cutting-edge research facilities such as nanofabrication laboratories,” said Heenkenda.

“We are privileged to work with distinguished professors doing research with industry, thereby consistently staying up-to-date with the latest research trends. These collaborations open many opportunities for students to gain invaluable experience preparing them for the future.”