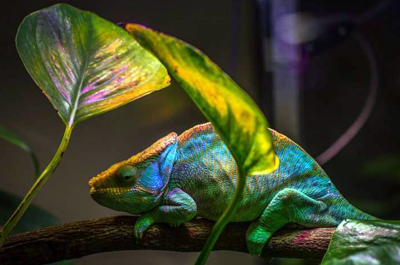 Novel nanolaser employs the same color-change mechanism that chameleons use.

As a chameleon switches its color from turquoise to pink to orange to green, depending on its surroundings, nature's design principles are at play. Inside its skin, complex nano-mechanics are quietly and effortlessly working to camouflage the lizard's appearance to match its environment.

Now, inspired by nature, a team at Chicago’s Northwestern University has developed a novel nanolaser that changes colors using the same mechanism as chameleons. They say that the work could open the door for advances in flexible optical displays for smartphones and televisions, wearable photonic devices and ultra-sensitive sensors to measure strain, for example.

"Chameleons can easily change their colors by controlling the spacing among the nanocrystals on their skin, which determines the color presented," said Teri Odom, the Charles E. and Emma H. Morrison Professor of Chemistry in Northwestern's Weinberg College of Arts and Sciences. "This coloring based on surface structure is chemically stable and robust."

The research was published online in Nano Letters. Odom, who is the associate director of Northwestern's International Institute of Nanotechnology, and George C. Schatz, Charles E. and Emma H. Morrison Professor of Chemistry in Weinberg, served as the paper's co-corresponding authors.

In the same way a chameleon controls the spacing of nanocrystals on its skin, the Northwestern team's laser exploits periodic arrays of metal nanoparticles on a stretchable, polymer matrix. As the matrix either stretches to pull the nanoparticles farther apart or contracts to push them closer together, the wavelength emitted from the laser changes wavelength, which also changes its color.

Reversible, tunable nanolasing with high strain sensitivity and no hysteresis.

"Hence, by stretching and releasing the elastomer substrate, we could select the emission color at will," Odom commented. The resulting laser is robust, tunable, reversible and has a high sensitivity to strain. These properties are critical for applications in responsive optical displays, on-chip photonic circuits and multiplexed optical communication.

“Our semiquantum modeling demonstrates that lasing build-up occurs at the hybrid quadrupole electromagnetic hot spots, providing a route to mechanical modulation of light-matter interactions on the nanoscale.”