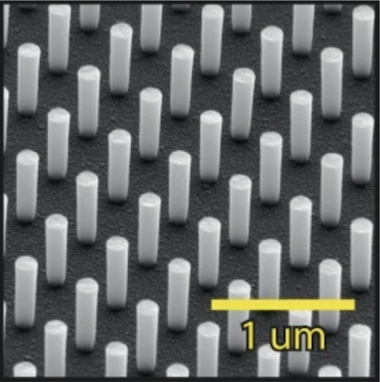 A project from the Harvard SEAS lab of metamaterials developer Federico Capasso could help address the issue of unwanted light dispersion in optical systems.

This could be a particular benefit for applications using femtosecond laser pulses, in which the fundamental difference between the velocity of red light through glass and that of blue light through the same glass can elongate pulses and present problems for imaging and communications.

As published in Nature Communications, the new research has developed a silicon coating that can be applied to the surface of a glass lens and counteracts the dispersive effects.

"Our flexible approach can be rapidly implemented in conventional optics and optical setups, and be adapted to different spectral regions and applications," said Federico Capasso.

The coating consists of silicon nanopillars roughly 600 nanometers high and 160 nanometers wide, effectively acting as an array of waveguides on the surface of the glass lens.

Interaction between the pillars and the electric field profiles of the incoming light can counteract the temporal broadening of pulses traveling through the glass that would normally take place, essentially delaying the red wavelengths and allowing the blue wavelengths to catch up.

"We tailor the dispersion of silicon nanopillar arrays such that they temporally reshape pulses upon transmission using slow light effects, and act as ultrashort laser pulse compressors," said the project in its published paper.

One consequence of this approach is that it can be applied in two distinct scenarios. The nanocoatings could be applied to a thin substrate to deliberately shorten elongated pulses, or to thick optics components to compensate for their group delay dispersion, allowing the coatings to act as the basis for an array of anti- or non-dispersive optics, according to the project.

The research continues the application of patterned nanosurfaces to the manipulation of light and removal of unwanted wavelength effects, potentially valuable in several applications. Other examples include a 2018 project at the University of Columbia developing a lens capable of mitigating dispersion and focusing a large range of wavelengths to the same focal point.

"Our coating counteracts the dispersive effects of transparent materials, acting as a speed bump for red light and averaging out the speed of each wavelength of light," said Marcus Ossiander, a postdoctoral research fellow at Harvard SEAS.

In trials, the coating proved capable of transmissive broadband pulse-compression in the visible to near-infrared spectral region, making it significant for a number of potential applications. The nanopillar coatings were made using commercial lithography tools, so it should be easy to apply them to existing optical components.

"Now anyone can buy a lens, put the coating on and use the lens without worrying about dispersion," said Ossiander.