Another quarter of record-breaking revenues, but lower profits as shipments of higher-margin products are delayed. 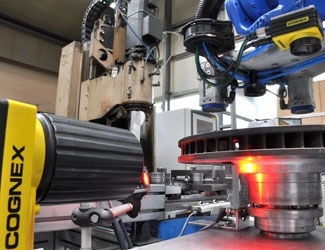 Machine vision company Cognex has reported its highest-ever sales figures for the second successive quarter, but saw its stock price slip in value by around 15 per cent as supply chain shortages hit the US firm’s profit margins.

At $285 million, sales in the three months ending October 3 represented the highest figure in Cognex’s 40-year history - and were up 13 per cent on the same period last year.

And although the Massachusetts company remains highly profitable, its pre-tax income of $88.5 million was down from $101.3 million last year.

Describing the supply chain environment as “very challenging”, Cognex’ CEO Robert Willett said: “In regard to supply, we believe we have been managing global chip shortages relatively well so far.

“However, the constraints are beginning to hold back revenue growth and drive cost increases more noticeably. Demand from customers is high and meeting their needs remains our top priority as we work through this situation.”

Chip constraints
Speaking in an investor conference call, Willett said that demand from nearly all of the firm’s key markets remained strong in the latest quarter, with the only exception being consumer electronics manufacturing, where the comparative quarter in 2020 was particularly strong.

However, the shortage of certain chip devices led to higher freight costs and component prices in some cases, while others have been entirely designed out of products because they are simply not available.

“We also experienced longer delays on some higher-margin product sales that we now expect to recognize as revenue in Q4 and beyond,” added the CEO. The Cognex executive team said that around $20 million in quarterly sales were deferred as a result.

Willett added that he expects the supply chain situation to continue dragging on margins “for the next several quarters”.

But a related macroeconomic effect - the shortage of labor - will ultimately benefit Cognex, by driving additional demand for automation and machine vision technology.

Regarding the more immediate future, Willett told investors that quarterly sales would likely be in the region of $220 million in the closing quarter of the year - close to the figure recorded in the same period of 2020.

A key element of that modest outlook reflects the supply chain environment. “We believe the situation will continue to be challenging and constrain revenue growth in Q4,” Willett advised, although with continued strong orders the firm’s backlog should grow, and full-year sales should top the $1 billion mark - up from $811 million last year.

The CEO also highlighted the current strength of the automotive market, particularly the level of investment in electric vehicle (EV) battery production, saying:

“After a couple of difficult years for us in automotive in 2018 and 2019, we're really starting to see a very healthy [environment] this year, and a lot of optimism, particularly around EV in the medium to long term.”

• Following the November 4 update, Cognex’ stock price slumped in value by around 15 per cent, although it has recovered some ground since then. Currently trading at around $82 on the Nasdaq, that represents a market capitalization of around $15 billion.