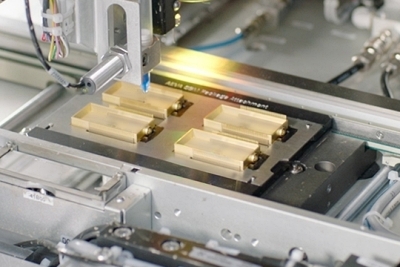 Aeva, the Silicon Valley company aiming its chip-scale lidar technology at autonomous vehicle applications, has agreed a deal with contract manufacturer Fabrinet to produce its silicon photonics modules in volume.

The Mountain View firm, one of several lidar purveyors to have raised capital through “SPAC” stock market listings recently, is one of only a few working on frequency modulated continuous wave (FMCW) technology, which uses chirped frequencies rather than pulses of light to scan its surroundings.

Aeva’s module integrates key components, including laser transmitters, optics, and receivers, onto a single silicon photonics chip design that is said to be a mass-manufacturable lidar solution for both automotive and industrial applications.

Aeva adds that it is establishing a local team in Thailand to support the new manufacturing activities, and points out that the Fabrinet facility is already automotive industry qualified, with IATF 16949 certification.

‘Ahead of schedule’
Fabrinet CEO Seamus Grady, who indicated earlier this year that the automotive lidar sector was likely to yield a major new business opportunity for the contract manufacturer, said in response to the Aeva deal:

“Our advanced manufacturing capabilities will enable Aeva to bring their vision to reality at mass production scale, and we look forward to supporting Aeva as long-term partners as they ramp toward production.”

Tim Willis, VP at Aeva with responsibility for manufacturing, added: “Fabrinet is a trusted manufacturer and automotive qualified supplier to some of the largest global OEMs and Tier 1 suppliers in automotive and non-automotive applications, and this agreement allows us to accelerate our production manufacturing capabilities well ahead of schedule.

According to its proponents, the FMCW approach is superior to conventional time-of-flight pulsed systems, both because of its compactness and the ability to determine the position and velocity of other road users.

Although it has typically been regarded as a significantly more complex and much less mature technology than other lidar schemes, it appears to have a growing number of supporters - not least Intel and its autonomous driving division, Mobileye, as well as Aurora Innovation, SiLC Technologies, and others.

Luminar hooks up with Nvidia
Meanwhile Luminar Technologies, another lidar firm to have conducted a successful SPAC listing, says it has been selected by Nvidia to be part of the sensor suite in the chip giant’s “DRIVE Hyperion” reference platform for autonomous vehicles.

“This AI vehicle computing platform accelerates development of autonomous consumer vehicles with planned production starting in 2024,” announced Luminar, whose lidar platform is based around 1550 nm lasers and able to take advantage of more relaxed eye safety regulations than at shorter infrared wavelengths.

Its founder and CEO, Austin Russell, added: “Nvidia has led the modern compute revolution, and the industry sees them as doing the same with autonomous driving.”

“The common thread between our two companies is that our technologies are becoming the de facto solution for major automakers to enable next-generation safety and autonomy,” Russell claims. “By taking advantage of our respective strengths, automakers have access to the most advanced autonomous vehicle development platform.”

Ouster eyes auto
Elsewhere in the lidar landscape another SPAC-fuelled Californian startup, Ouster, has reported a sharp rise in shipments and sales in its latest financial quarter.

For the three months ending September 30, it reported sales of $7.8 million, up 30 per cent year-on-year after sensor shipments more than doubled, to 1630 units.

Despite the uptick in sales, the San Francisco firm - which recently acquired Sense Photonics - posted a net loss of $12.7 million in the quarter, although that figure has narrowed from $19.6 million a year ago.

In addition to that, the company has launched a new lidar platform aimed at the automotive industry specifically. The “DF series” is described as a suite of short, mid, and long-range solid-state digital lidar sensors providing uniform precision imaging without motion blur across an entire field of view.

“With absolutely no moving parts, the DF series is built for best-in-class reliability, durability, and affordability,” Ouster claims. The platform is intended to be available for consumer vehicles starting production in 2025, with samples now shipping to OEMs and Tier 1 partners.