High-power lasers to work with lab’s X-ray laser to boost understanding of matter. 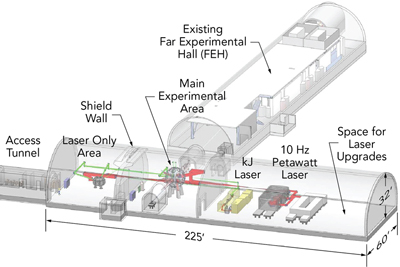 Approved: petawatt laser facility to be built at at SLAC, Stanford. Click for info.

Now that a superlaser concept at Stanford’s SLAC has been approved by the U.S. Department of Energy, it is expected to offer some big challenges to the optics industry to invent new detectors and develop an array of other technology. The potential benefits of the petawatt laser include routes to clean fusion energy and insights into high energy astrophysics.

“We will need a whole new suite of diagnostics,” commented Arianna Gleason, a member of the team at the Stanford SLAC, a DOE linear accelerator project. “Future success depends on innovating new detectors to operate in harsh temperature/pressure and radiation environments on an ultrafast timescale.”

“All across the globe, industry will be developing different kinds of optical, X-ray or neutron sensors. There’s a real opportunity here – the need for novel diagnostics to support this research will help us innovate beyond just laser science.”

The high energy density science project at SLAC is called the Matter in Extreme Conditions Upgrade, or MEC-U. The underground petawatt laser facility – which may see construction gearing up by 2025 – got approval from DOE in early October to move from the concept stage to design and execution. It may be operating by 2028.

Alan Fry, MEC-U Project Director, commented, “The MEC-Upgrade will be a major upgrade to our existing Matter in Extreme Conditions facility, increasing laser power by two orders of magnitude. By combining the Linac Coherent Light Source , or LCLS, the world’s first hard X-ray laser, with high power optical lasers, we can precisely produce and probe some of the most extreme states of matter in the universe.”

A petawatt laser can deliver the amount of energy in a bolt of lightning and focus it all on a target equal to the tip of a pencil. Or, the energy level could be seen as a blast equal to the amount of sunlight hitting California for a tiny fraction of a second. One payoff, researchers hope, will be in alternative energy sources. 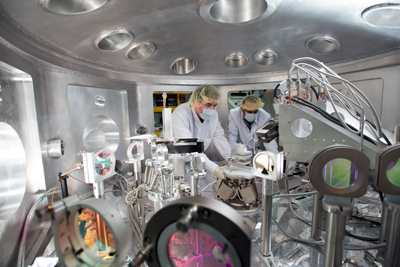 The team would like to pace the petawatt laser timetable in step with work on the lab’s Linac Coherent Light Source, or LCLS, to upgrade its X-ray free electron laser capability. Having both capabilities is what makes Stanford’s project special. SLAC will design and build the laser in partnership with Lawrence Livermore National Laboratory, east of San Francisco, and the University of Rochester’s Laboratory for Laser Energetics.

The petawatt laser facility will be operated as part of the existing LCLS user facility, and access will also be made available through the DOE’s LaserNetUS. Other sites in DOE’s LaserNetUS are at Colorado State; Lawrence Berkeley National Laboratory; the Ohio State University; the Universities of Michigan, University of Nebraska, University of Rochester, Central Florida and Texas, and a string of sites the INRS in Quebec, Canada. DOE has approved $18 million for the LaserNetUS sites in the current cycle.

The DOE Office of Science approval means SLAC may now move ahead from conceptual design to preliminary design and execution. It can now identify the components of the project, and the infrastructure, and size and scale of the housing. SLAC said it can now pinpoint the exact kind of laser it wants, and its cost and other technical details to meet DOE mission needs.

“We can carve out a science scope to match DOE needs,” added Gleason. “It’s really exciting. We can do great science on the whole frontier of high density physics.”