Orders and profits up sharply at Trumpf

Unexpectedly high level of orders at laser firm tempered by uncertainty over chip shortages and inflation. 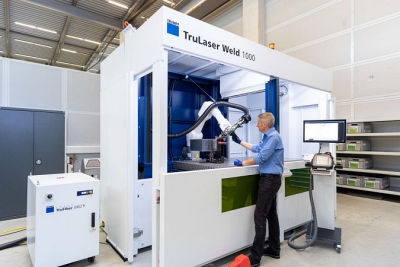 Industrial laser giant Trumpf says that its profits and orders both rose by around 20 per cent in its latest financial year, as the company became more productive in the midst of the coronavirus pandemic.

CEO Nicola Leibinger-Kammüller revealed an earnings before interest and tax (EBIT) figure of €370 million for the 12 months ending June 30 - up from €309 million in the prior year.

That was despite almost no increase in full-year sales, which remained flat at €3.5 billion, with the company able to stabilize earnings by “increasing productivity, changing the product mix and consistently cutting non-personnel costs”.

It meant that, in the second half of the year, earnings improved significantly as sales revenues rebounded from the initial impact of the pandemic.

And at close to €4 billion, the company’s order book as of June stood at the highest level in the Germany-headquartered firm's 100-year history.

Laser sales up 10 per cent
Summing up the year, Leibinger-Kammüller added a note of caution despite the company’s booming order book: “Owing to our systematic crisis management, Trumpf managed to survive the pandemic well. Due to a strong rise in demand, we entered the new fiscal year with an unexpectedly high order intake.

“Nevertheless, there will still be a lot of uncertainty over the coming months with regard to how chip shortages in global supply chains, inflation, and increasing energy costs and their effect on transportation costs and transportation capacity will affect our business.”

According to a presentation by the family-owned company’s executive team, a slight drop in sales of machine tools in the latest financial year was more than offset by a 10 per cent increase in Trumpf’s laser-specific business, to €1.32 billion.

Leibinger-Kammüller said that Trumpf attributed this increase to fast-growing demand across applications in electronics, photovoltaics, and electric vehicle production, particularly in China.

That saw overall company sales to China jump more than 50 per cent on the prior year’s total, to €525 million.

Flexible working
Despite the impact of the pandemic, Trumpf’s headcount has continued to grow - the company now employs 15,000 people overall, up 3 per cent from last October.

Some 4400 of those employees now work at the firm’s Ditzingen headquarters, near Stuttgart, and from the start of 2022 they will enjoy a much greater degree of flexibility in their working conditions.

“The executive board and the works council have agreed on a new alliance for jobs for the sites Ditzingen, Gerlingen, and Hettingen,” Trumpf said. “This will include new rules governing remote working at Trumpf, amongst other things.

Before the pandemic, employees were only allowed to work remotely 20 per cent of the time, but that rule will be dropped from January, with specific arrangements to be agreed by managers with their teams.

“This forms part of Trumpf’s move away from an attendance-based culture over to a results-based culture,” the firm explained, adding that it would no longer specify attendance in terms of percentage or hours.