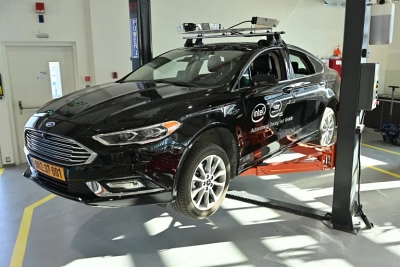 Mobileye, the Intel subsidiary widely regarded as a leader in advanced driver assistance systems (ADAS), has chosen Luminar Technologies to supply lidar equipment for the next stage of its autonomous vehicle development program.

The agreement will see the two firms collaborate on the first generation of Mobileye’s “level 4” robo-taxi pilot and driverless fleet in Tel Aviv, Paris, Dubai, and Daegu City, South Korea.

According to the US National Highway Transportation Safety Administration, level 4 autonomy is defined as a system that in certain circumstances can "perform all driving tasks and monitor the driving environment".

Independent channels
Under the terms of the deal, Mobileye will use Luminar’s lidar in its “True Redundancy” self-driving technology, which takes a significantly different approach to sensor fusion than has been seen thus far.

Instead of combining inputs from cameras, radar, and lidar sensors to “see” the highly dynamic environment around a moving vehicle, Mobileye’s strategy is to generate two independent viewing channels - one created by the camera suite, and the second from a combination of radar and lidar data.

“Sensor redundancy is meant to ensure that sensors serve as back-ups for one another. But we often see complementary, not redundant, sensors - where cameras and radar or lidar each sense certain elements of the environment, which are then combined to build a single world model,” explains the firm.

“At Mobileye, we task both channels - camera and radar-lidar - with sensing all elements of the environment and each building a full model. This is ‘True Redundancy’.”

By processing completely independent streams of data via those two channels, the idea is to ensure significantly greater perception accuracy, eliminating the impact from problems with any individual sensor.

Commercial traction
Luminar’s CEO Austin Russell, who founded the California company while still a teenager, said in a release announcing the latest collaboration:

“Mobileye disrupted the auto industry to become the undisputed king of ADAS, and with the right partner is uniquely positioned to enable autonomy at an unprecedented scale.

“After collaborating with Mobileye for over a year, we’re excited to formalize this deal and work towards a shared vision of making autonomy safe and ubiquitous.”

Luminar, which is in the process of listing on the Nasdaq via a reverse merger with investment company Gores Metropoulos, says it is now involved with no fewer than 50 commercial partners working on self-driving passenger vehicles, trucks, and robo-taxi services.

Among the highest-profile of those is Volvo, which has invested in Luminar and plans to deploy the firm’s 1550 nm fiber laser technology inside production vehicles from 2022 onwards.

Luminar has also worked with Toyota and Audi previously, and now says its commercial traction has resulted in opportunities to convert 12 of its OEM programs and engagements from the development stage and into production before 2025.