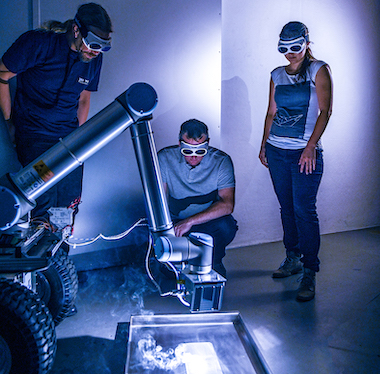 A project investigating the feasibility of carrying out 3D printing of moon-dust on the lunar surface has concluded by successfully testing its prototype laser system on a lunar rover test-bed.

Moonrise, a consortium led by Laser Zentrum Hannover (LZH) together with the Institute of Space Systems (IRAS) of the Technical University of Braunschweig, has spent two years designing a laser platform potentially able to melt lunar regolith into structural forms. The work was funded by the Volkswagen Foundation.

This research included use of the recently constructed Einstein-Elevator installation at Hannover Institute of Technology, a sophisticated drop-tower in which microgravity conditions can be created. The Moonrise project was the first scientific experiment in the Einstein-Elevator, according to LZH.

The Moonrise project has now reached its goal by mounting a 3-kilogram laser system on MIRA3D, the mobile robot arm prototype built by IRAS as a test bed for technologies able to operate on future lunar rover vehicles.

Trials showed that the Moonrise laser could successfully melt synthetic material modelled on moon-dust into joint lanes, a key structural form for the creation of more complex shapes. The robot arm controlled the laser head under commands from the LZH, indicating how it could be used on the Moon in the future.

"In the last two years, we have developed a laser head that is only about the size of a large juice box and yet can withstand the adverse conditions in space," commented Niklas Gerdes from LZH. "During the first tests in the laboratory, we determined the necessary irradiation duration and laser power. Then we went into the vacuum chamber and successfully melted regolith there."

The Volkswagen Foundation, backed by capital of €3.5 billion, is the largest private research funder in Germany, and supports work across social science and the humanities as well as technology.

Its previous investments in photonics research have included support for the development of lasers installed at the Advanced LIGO gravity wave observatories, via funding of work at the Albert Einstein Institute. The Foundation has also provided opportunities for young researchers to work with the X-ray free-electron laser at Stanford University, alongside their studies of X-ray laser technology in Germany.

The trials using MIRA3D have confirmed that the laser system developed by Moonrise is robust enough to survive the voyage to the Moon and capable of successfully sintering lunar dust once there, according to the Moonrise project.

The next milestone would be to develop the laser head into a flight model, with LZH and IRAS currently in talks with relevant agencies.

One opportunity could come via PTS, a Berlin-based aerospace company which had been planning to launch a lunar module in 2021, and which the Moonrise project has previously mentioned as a route to the Moon. In January 2020, the management team of PTS completed a management buy-out as part of a restructuring program.

In the meantime the Moonrise project has demonstrated that laser-based 3D printing is viable as a technology on the lunar surface, according to the team.

"We were able to precisely control the laser head on the arm of the rover and thus melt larger structures precisely," said Enrico Stoll from IRAS. "Together with the experiments in the elevator, we have a solid basis for 3D printing with the laser on the Moon."