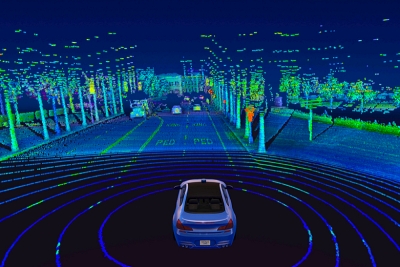 Baidu, one of the largest technology firms in China, has agreed a three-year deal to buy lidar units from Velodyne for use in its autonomous vehicle development program.

Already an investor in the Silicon Valley lidar firm, Baidu says it plans to use Velodyne’s “Alpha Prime” sensors in conjunction with its open-source autonomous vehicle software platform, called “Apollo”.

Said to offer good detection of objects with low reflectivity - one of the most technically challenging requirements for lidar units on cars - the sensor is based around a 903 nm laser source.

“The Alpha Prime can help autonomous vehicles navigate roadways at various speeds, traveling in a range of road conditions such as rain, sleet and snow. This powerful lidar will enhance the vehicle capabilities.”

Nasdaq debut
News of the agreement comes just days after Velodyne, which recently listed on the Nasdaq via a reverse merger deal, said it had agreed a long-term cross-licensing deal with China-headquartered rival RoboSense.

The two firms had been headed to the courts over a patent dispute relating to 360-degree “surround-view” lidar sensors. The cross-licensing deal relates to both existing and future patents belonging to both companies.

“Velodyne and RoboSense are looking forward to a lidar market that will offer highly diverse products for real time 3D sensing applications to benefit the community of autonomous vehicles and other applications,” announced the pair.

Just over a year ago, Velodyne had initiated patent litigation against both RoboSense and Hesai Photonics Technology, another lidar developer in China.

The intellectual property at the center of the dispute, US patent 7,969,558, dates back to 2007 and describes an optical system based around a rotating mirror - an older approach to lidar that was seen on early autonomous vehicles but is not regarded as suitable for mass deployment.

$40M half-yearly loss
Having made its debut on the Nasdaq September 30 via a reverse merger with investment firm Graf Industrial, Velodyne is now trading under the ticker symbol “VLDR”. CEO Anand Gopalan, recently promoted from the CTO role, said at the time of the listing:

“Becoming a public company enables Velodyne to invest more in delivering new transformative autonomous technology and powerful ADAS products to make our world a better place. With our broad portfolio of lidar sensors and revolutionary software, we strive to transform communities by advancing safer mobility for all.”

Now required to announce financial results on a quarterly basis, Velodyne is due to deliver its first such report November 5. According to a recent market report from analysts at Yole Développement, the Californian firm ranks fifth on a list of all lidar equipment firms.

With annual sales of around $100 million in 2019 Velodyne was the highest ranked company selling into automotive applications. However, according to its latest filing with the US Securities & Exchange Commission (SEC), in the first half of 2020 Velodyne posted an operating loss of nearly $40 million on sales of $45 million.

The company, which is pursuing a similar financial move to Velodyne’s in order to list on the Nasdaq, said that the units, manufactured in Orlando, Florida, were headed to key commercial partner Volvo. Full series production is anticipated in 2022.